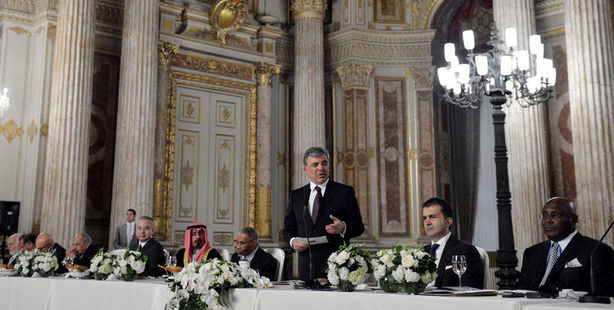 President Gül hosted a dinner at Dolmabahçe Palace in honor of the Oxford Center for Islamic Studies on Thursday.

Hosting a dinner at Dolmabahçe Palace for the Oxford Center for Islamic Studies (OCIS), President Abdullah Gül pointed out the successful accomplishments the institution has made in the area of Islamic culture and civilization and stated, "This center plays an important role in passing on the understanding of the true values of Islam in both the Eat and the West. This center has been a pioneer in a number of areas while is also the 800-year-old Oxford University's first Islamic academic institution.

Delivering an address at the event held at Dolmabahçe Palace, President Abdullah Gül stated the following:

* The influence of the Oxford Center for Islamic Studies has spread to the Islamic world and beyond.

* The center has promoted to the highest level the values of harmony and mutual understanding, which are much needed in today's world.

* The path to tolerance and rapport is through creating constructive and concrete efforts to further these values today and for future generations. This is a noble intention in which all of us will feel proud to be a part of.