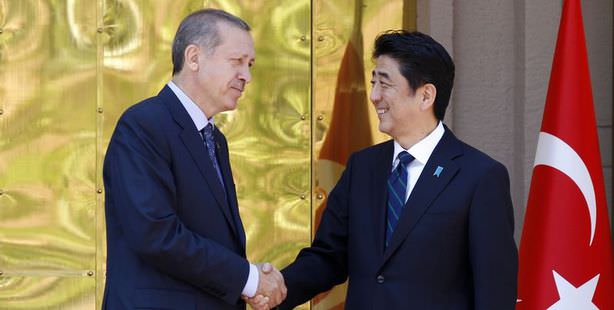 Japanese Prime Minister Abe commented on the ongoing resolution process in Turkey by stating, “As it will establish peace, stability and security in the region, it will further strengthen relations between turkey and Japan.” Remarking that chemical warfare is being used in Syria, Abe also stated that no solution will be reached while Assad is still in power.

Japanese Prime Minister Shinzo Abe was speaking at a press conference at the Istanbul Hilton Hotel during his stay in Turkey when he said that as long as Assad remains in power, there will be no solution reached in Syria. Abe went on to state that the aim of his trip to Turkey, Russia and the UAE as parts of a Middle East tour is to establish cooperation, a mutual existence and harmony and tolerance.
Drawing attention to the situation in Syria, Abe expressed that Japan was ready to act alongside the international community to do whatever it is that befalls them.

* MIDDLE EAST: "Our government has decided to designate 2.2 billion dollars in resources to the Middle East and North Africa. As Japan, we want to reach beyond the scope of energy-centered cooperation with the Middle East."

* IRAQ: "In Iraq, there will be economic development in the areas of energy, health and food. We are well aware that Turkey has rooted experiences in Northern Iraq. Cooperation between Japanese and Turkish firms will result in significant opportunities.
(In response to a question on the resolution process) "As it will establish peace, stability and security in the region, it will further strengthen relations between Turkey and Japan. Collaborations between Turkey and Japan in the days to come will not remain limited to Iraq."

* SYRIA: "We are right in the middle of a historical transformation in the Middle East. Japan is ready to take any sort of step to ensure the region attains stability and welfare. We will be transferring 2.2 billion dollars in support to the region to establish stability. Human lives are being lost in Syria and there is most likely the issue of chemical weapons being used. A political transition is important; however no solution will be reached as long as Assad remains in power. We are ready to act alongside the international community to do whatever it is that befalls them. As for Iran's nuclear program, we share the same concerns as the international community. While pressure continues to be exerted on Iran, we also need to approach this process through the route of dialogue."

A MEETING OF PRIME MINISTERS

Prime Minister Recep Tayyip Erdoğan greeted Japan's Prime Minister Shinzo Abe with an official ceremony. The ceremony took place in front of the Prime Ministry building with the playing of both nations' national anthems. Japanese Prime Minister Abe greeted the escort of honor by saying, "Merhaba asker." After posing for photographs for reporters on the protocol stairs, the two moved on to hold meetings. Also in attendance at the welcoming ceremony were Minister of Energy and Natural Resources, Taner Yıldız, AK Party Deputy Chairman Mevlüt Çavuşoğlu, Prime Ministry Undersecretary Efkan Ala and Prime Ministry Deputy Undersecretary İbrahim Kalın. After holding bipartite as well as inter-committee meetings which lasted for approximately two hours, Prime Minister Erdoğan escorted his Japanese counterpart to his vehicle for his departure.

Prime Minister Tayyip Erdoğan jokingly asked his Japanese counterpart Shinzo Abe to withdraw Japan's Olympics bid and let Turkey host the 2020 Games on Friday. "You've hosted the Games before, withdraw your bid so we can host them once," Erdoğan told a joint press conference he held with Abe to sign a $22 billion dollar deal to build a nuclear facility in Turkey. "I believe that the prime minister will appreciate our request, and it would be right if he gives related instructions to the Tokyo governor," Erdoğan said, causing laughter in a room of Japanese and Turkish government officials and businessmen.

Japanese Prime Minister Abe atoned for the inappropriate comments made by Tokyo's outspoken governor, Naoki Inose, who heads the city's bid for the 2020 Olympics and Abe then went on to state, "When we held the Olympics it was in 1960 and I was just a child. I want our Japanese public to enjoy this pleasure. If Istanbul wins the right to host the Olympic Games, I will be the first one to applaud them. In the same manner, if Tokyo acquires the right to host the Olympics then I have no doubt that the first to commend us will be Turkey."

This is a translation of an article originally written by Mehmet Ali Berber and Safure Canturk.