It’s time for the neo-Nazis to be held accountable 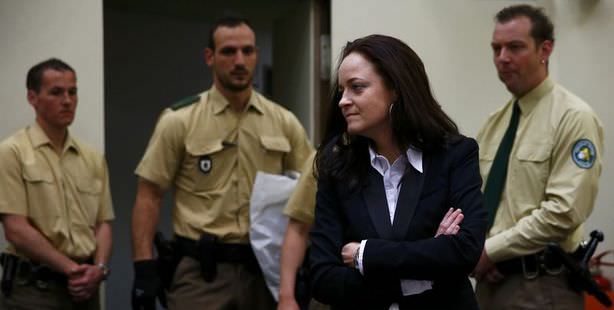 The trial of the National Socialist Underground (NSU) neo-Nazi cell responsible for murdering ten immigrants in Germany, eight of which were of Turkish heritage, begins today. The trial, which will put five suspects to the stand, is expected to take at least two years to conclude.

Considered to be one of the most anticipated court cases in recent German history, the National Socialist Underground (NSU) trial begins today. The trial in Munich will focus on 38-year-old Beate Zschaepe, who is charged with complicity in the murder of eight Turks, a Greek and a policewoman in Germany between the years 2000-2007. Joining Zschaepe are four others who are being charging with assisting the NSU. The trial, which was originally scheduled to begin on April 17, however due to SABAH's contesting of errors made in the accreditation process for the hearing was delayed until May 6th, is expected to go on for at least two years.

The trial of five suspects begins today in the Munich Higher Regional Court. Two of the suspects on trial, Beate Zschaepe and Ralf Wohlleben are being tried for being amongst the leaders of the NSU organization. With the deaths of Uwe Mundlos and Uwe Böhnhardt, Zschaepe and Wohlleben are considered to be the sole suspects to have true knowledge of the events that transpired. Zschaepe, who is thought to have knowledge of all of the planning involved, is considered to be the "most significant" remaining living member of the NSU. Even though initially she may have said she was willing to confess, 38-year-old Beate Zschaepe who is considered to be the NSU's safeguard and secret-holder, will now remain silent upon advisory from her attorneys.

The remaining suspects on trial include Carsten S., who is being charged with having obtained the Ceska brand semi-automatic and silencer used in the murders. Holger G. is being tried for obtaining false documents which allowed NSU members Uwe Böhnhardt, Uwe Mundlos and Beate Zschaepe to live under new identities. Holger G. is claimed to have provided Böhnhard with a driver's license and passport. The suspect is therefore being tried for "assisting a terrorist organization." The final suspect, Andre E., is being charged for renting the caravan used in a bombing in Köln. Andre E. has been indicted for aiding an attempted murder, involvement in a bombing and two robberies as well as assisting a terrorist organization. The suspect allegedly prepared racist DVD's and was assisted by his wife Susann. NSU members Uwe Böhnhardt and Uwe Mundlos, who were killed in a caravan following a botched bank robbery in Eisenach on November 4th, 2011, were responsible for killing ten people, eight of which were of Turkish heritage. The same Ceska-type gun was used in all of the murders, which tended to target Turks running small-businesses or shops.

Deputy Prime Minister Bekir Bozdağ commented on the trial beginning in Germany on Monday by using the expression, "We want justice to be served." Bozdağ also said they are expecting the court to serve justice, the suspects be charged with the punishment they deserve, for the truth to be revealed and for the court to handle the case impartially.

*The Munich Higher Regional Court will be holding the trial with five judges and three acting judges. In the case of one of the judges falling ill or being unable to attend a hearing, an acting judge will serve in their place.

*The trial of five suspects will include testimonies from 606 witnesses. The indictment for the trial which has 77 intervening parties being represented by 53 attorneys, consists of 488 pages. As for the 600 files included in the case, they consist of over 280,000 pages.

* There have been a series of renovations made to the courtroom the trial is being heard in. A total 1.250 million dollars was spent on renovations which include setting up microphones for translators as well as the renewal of the courtroom window. It is stated that the trial, for which three hearings are planned every week, may last for two years.

* The Federal Chief Public Prosecutors Office, which has headquarters in Karlsruhe and was responsible for preparing the indictment, will be sending various prosecutors to handle the case. A team led by terrorism specialist Prosecutor Rainer Griesbaum worked on the indictment by inspecting thousands of pages worth of files.