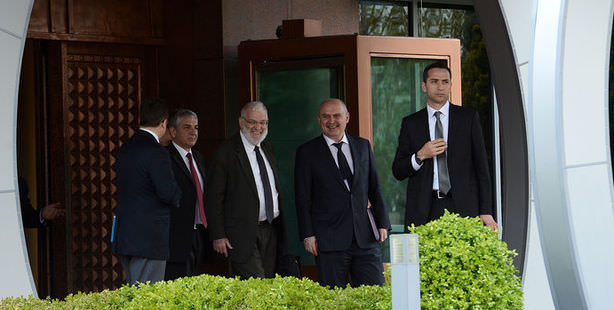 Negotiations between Turkish and Israeli officials on the compensation to be paid out to the victims of the Mavi Marmara raid, a precondition set by Turkey for the normalization of relations, have come to a close in just the second round of talks.

Turkish and Israeli officials which met in Israel to resume negotiations on the conditions for the compensation to be paid out by Israel to the victims of the Mavi Marmara raid, have reached an agreement on the text dictating the content of the agreement. Final approval on the compensation to be paid out will be made by Prime Minister Tayyip Erdoğan and Israeli Prime Minister Benjamin Netanyahu.

A delegation consisting of Turkey's Foreign Ministry Undersecretary Feridun Sinirlioğlu and Deputy Undersecretary Ömer Onhan met with Netanyahu's advisors Yahod Amidror and Yosed Cehanover in Jerusalem on Monday. Yesterday's meeting marked the first time a senior-level Turkish delegation has arrived to Israel in the past three years ever since relations frayed following the Mavi Marmara raid.

According to Turkish diplomatic sources, just like the first round in Istanbul, the second round of talks in Jerusalem transpired in an extremely constructive atmosphere. Both sides reached a consensus on the content of a draft text dictating the conditions for compensation. However, their does remain small sections of the text that necessitate further explanation. These kinks are expected to be ironed out through diplomatic channels after which the text will be presented to the Turkish and Israeli prime minister's for their final approval.

The Turkish side also expressed that they would be passing on the agreement to the assembly for parliamentary approval. The agreement is expected to be finalized without necessitating a third round of talks. Meanwhile a senior-level official from the Israeli Foreign Ministry stated, "The meeting went well, we may not need to hold a third meeting."