Gül: There is a deadlock on the drafting of a new constitution 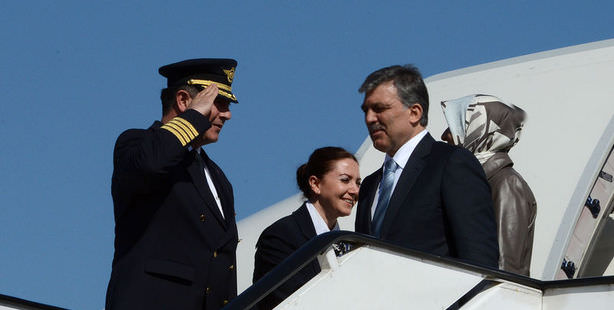 President Gül responded to reporters’ questions in Portugal on the ongoing efforts to draft a new constitution. “The point where we are at presently is unfortunately a deadlock on the drafting of a completely new constitution.”

While on an official visit to Portugal, President Abdullah Gül held a one-on-one meeting with Portuguese President Anibal Cavaco Silva in the Belem Palace in Lisbon on Monday. Gül was joined by Foreign Minister Ahmet Davutoğlu and Minister of Culture and Tourism Ömer Çelik, who arrived in Lisbon on Monday morning for a joint committee meeting that followed. Speaking at a press conference held after the meetings, President Gül pointed out that there were a significant number of businessmen and investors in his committee and emphasized the importance placed on economic cooperation between the two nations.

In response to a reporter's question on the ongoing efforts in Turkey to draft a new constitution, President Gül stated the following: "The constitution that was drafted in 1980 is slightly restricting for the Turkey of today. Therefore, efforts were initiated to draft a more modern constitution within the framework of the perception of all political parties. As far as I can see, the point where we are at presently is unfortunately a deadlock on the drafting of a completely new constitution as difficulties have surfaced regarding reaching a comprehensive compromise. Therefore, if a new constitution is not drafted then there is the possibility of making amendments and continuing on from there. The political process and democratic process in Turkey is transgressing quite openly and plain for everyone to see. Let's see what our parties decide in the end as that will be the determining factor."

Pointing out that this is not a precondition for the EU; Gül reminded that Turkey is a country that has already begun EU accession negotiations. Gül went on to remark that what matters is adapting the EU acquis, standards and law to Turkey and stated, "As for this issue, our Assembly, our government and all of our political parties are extremely determined."

SILVA: THE SITUATION IN SYRIA IS A HUMAN TRAGEDY

Portuguese President Anibal Cavaco Silva reminded of their support for Turkey's EU membership and assured that Portugal's support would continue. As for the situation in Syria, Silva remarked that they have supported the Syrian opposition from the start and stated, "What we are seeing is the destruction of a public and its country."