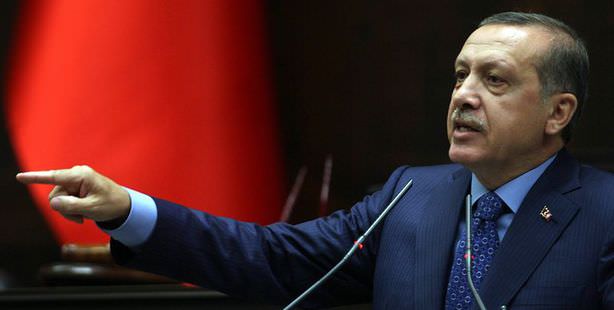 Prime Minister Tayyip Erdoğan condemned on Tuesday Israeli air strikes on targets near Damascus, saying they were an opportunity for Syrian President Bashar al-Assad's government to cover up its own killings.

Prime Minister Recep Tayyip Erdoğan strongly condemned the Israeli airstrike on a military complex near the Syrian capital of Damascus over the weekend during an address at a parliamentary group meeting for his leading Justice and Development Party (AK Party) on Tuesday.

"The air strike Israel carried out on Damascus is completely unacceptable. There is no rationale, no pretext that can excuse this operation," Erdoğan told a parliamentary meeting of his ruling party.

"These attacks are chances, opportunities offered on a golden tray to Assad and to the illegitimate Syrian regime. Using the Israel attack as an excuse, he is trying to cover up the genocide in Baniyas," he said. Erdoğan was referring to a Syrian coastal town where anti-Assad activists said at least 62 people were killed by government fighters over the weekend.

Israeli officials said the air strikes on Friday and Sunday were not intended to influence its neighbor's civil war but only at stopping Iranian missiles reaching Lebanese Hezbollah militants which is an ally of Syria for possible use against the Jewish state. According to activists, the death toll of the Israeli air strike was 42 Syrian soldiers.

Residents and opposition sources said the Israeli warplanes struck elite Syrian troops in the valley of the Barada River that flows through Damascus and on Qasioun Mountain overlooking the capital. They said targets included air defenses, Republican Guards and a compound linked to chemical weapons.

Lebanon, which borders both Israel and Syria, has also condemned the air strikes and called on the U.N. Security Council to condemn violations of its air space by Israel.

On Sunday Erdoğan condemned the recent massacre of civilians by Syrian regime forces in Baniyas by stating, "While children are woeful and crying, we will not be among the silent tongueless devils. Oh Bashar Assad, by god you will account for this. You will atone for the courage that you didn't show to others, for the baby lying in its crib with a pacifier in its mouth; you will pay very heavily."