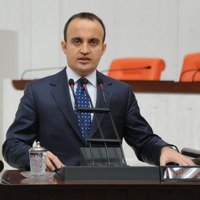 These were the words a leading still young up and coming AK Party Parliamentarian Bülent Turan, during a heated debate that emerged in the Turkish Grand National Assembly.

For those trying to understand the political climate in Turkey, the speech that was made at the Turkish Grand National Assembly will be one of great interest. Bülent Turan, a leading young member of the AK Party, brought to the floor the topic of how the leading opposition party, the leftist and secular CHP, Supported and voted for the capital punishment of leftist revolutionary Deniz Geçmiş and his companions in the Turkish Grand National Assembly Vote in the wake of the 1980 coup.

Today our friends from the CHP have spoken, they have mentioned how Deniz Geçmiş and his friends spoke against imperialism and sought freedom, they went on to complete their speeches with such bold remarks as, I will die once for my country's peoples' happiness and freedom, with my honor, but you our hangmen will die everyday with your dishonor" said Turan.

He went on to produce transcripts from the assembly of the time, and shed light on the hypocrisy of the opposition's actions, bringing to attention that not only did the CHP give support for the military coup, but also that they had a role to play in the capital punishment of Deniz Gezmiş and the friends that they now iconized.

"I had always thought that those who voted for the capital punishment of Deniz Gezmiş and his friends were the conservatives and rightists…." said Turan, "But after examining the official legal transcripts I was very surprised to see that the predecessors of those who hold make meetings to commemorate the forever living Deniz, and those who attend his funeral commemorations, our friends who bring into the spotlight daily this issue, that their sensitivity, did not share their views and sensitivity."

"If only your past counterparts we as sensitive as sensitive as you, if only they had pad as much attention to these events as you, if only they took as much responsibility for the for the youth that claimed to fight for this country's liberty, that they could not hang these people" observed Turan, "On this legal transcript that I hold, the transcript that allowed for the hanging of Deniz Gezmiş and his friends, there are around 30 listed CHP members, that voted yes for capital punishment.

" I am not saying this to be demeaning, but if only your predecessors were as sensitive, and aware, and as freedom loving as you, if only this sheet had 30 less signatures, Deniz Gezmiş and his friends would still be alive today" concluded Bülent Turan drawing light to the hypocrisy of the opposition's recent actions.
Last Update: May 08, 2013 5:22 pm
RELATED TOPICS