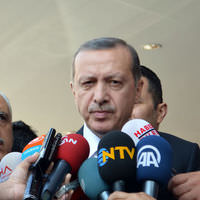 Following statements by Davutoğlu and other ministers, Prime Minister Recep Tayyip Erdoğan announced that the death toll has risen to 20 while those numbers could rise as the number of injured has now risen to 46.

Erdoğan released new figures stating that there were now approximately 20 dead and 46 injured, and said that due to the heavy injuries of some, the death count may rise again.

"To find out who is responsible for these attacks in Hatay we will utilize all of our intelligence services in the area as the investigations continue. From here I want to send this message to all of my siblings in Reyhan. This process is a sensitive process. Especially since we started the solution process in our country, and this they could not digest, those who do not share our countries feelings of freedom and unfortunately do not share these vies could have engaged in these types of acts." stated Erdoğan from his location in Istanbul.
Last Update: May 11, 2013 6:35 pm
RELATED TOPICS