The female commanders of Turkey’s military 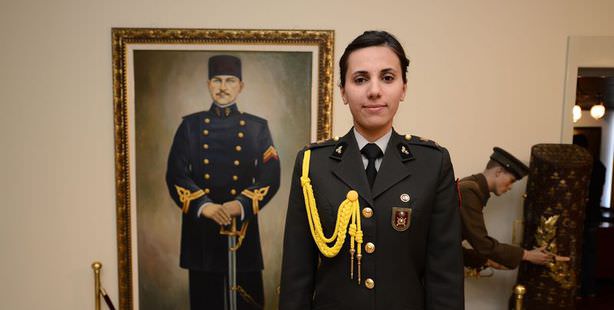 There are over 100 female students at the Turkish Military Academy that along with receiving an academic education are also undergoing military training. These female military students share the same goal: to become a future general and maybe even the Chief of General Staff.

Even though the Turkish Military Academy has opened the door for its high school students to take the university placement exam, Ceyhan Altıöz a high school senior at the military academy has chosen to remain where she is even though her scores qualified her for entrance to a university mathematics department. Altıöz explained that as the female class of the Harbiye Military Academy, they represent the nobility and self-devotion of Turkish women. Explaining that after graduation this year she aims to become a general staff officer, Altıöz stated, "Being promoted to general and then chief of general staff are just some of my goals."

Merve Civan, another student at the Turkish Military Academy, said she was inspired by a field trip she went on with the academy and has since pursued her dream of going into academia after taking her placement exam. Civan explained that after graduating she has the opportunity to receive a diploma in six different engineering categories; construction, electronics, computers, mapping, industry and systems as well as business management, public administration, sociology and international relations. Civan also explained that they can attend graduate school abroad. "There are difficulties to being a female student. However, we know that this will only allow us to further mature and become stronger," said Civan.

Despite qualifying for law school, Ayça Habiboğlu chose to remain at the military academy and is planning to receive a diploma in public administration while also becoming an officer.

Pointing out that they wear their uniforms to school, sophomore Büşra Demirbaş stated, "It is a great honor to wear this uniform, however it is not easy."