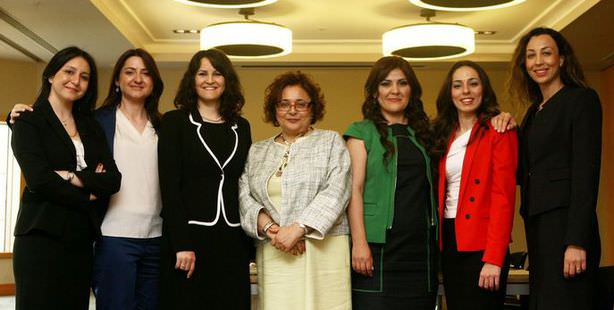 Six Turkish female scholars who completed their doctorates in the west have now returned to Turkey with grants offered by L'Oreal. Each one is both educating students while at the same time working on groundbreaking research projects. Their studies, which are receiving EU and TÜBİTAK support, will be shedding light on humanity.

These are Turkey's promising young female scholars. Each one completed their doctoral education at universities in Europe and the United States, and now they have returned home to offer their contributions to science. They are not only educating students but they are also signing on to projects that will shed light on humanity. Most of them are working on research that has garnered support from the EU as well as Turkey's Scientific and Technological Research Council (TÜBİTAK). While some are working on a new mechanism that will allow brain tumors to regress, others are seeking to revolutionize the aircraft and aerospace industry by developing plastic building materials that are able to self-repair.

The six young Turkish female recipients of L'Oreal's International Fellowships Programme for Young Women in Life Sciences, which is supported by UNESCO have been announced. Six of the 50 female scholars that applied for the fellowship have been granted an annual scholarship of 15,000 dollars. These six women, who were awarded their fellowships at a special ceremony held at the Swissotel, shared details on their research projects with SABAH.

Professor Dr. Solmaz Karabulut, a professor at the Hacettepe University College of Science Chemistry Department, is one of those young promising female scholars. Karabulut, who is seeking to revolutionize the aircraft and aerospace industry, is working on developing plastic building materials that are able to self-repair. TÜBİTAK is also supporting her project. Pointing out that plastic building materials are frequently used in the aircraft and aerospace industry, Karabulut explained, "For example, if a deep crack occurs as a result of a plane crash, then this plastic material will be able to begin repairing itself as a result of the added materials it contains. I am hoping to increase the lifespan and durability of these materials."

A HARAKIRI FOR BRAIN CANCER

Assistant Professor Dr. Tuğba Bağcı from Koç University Medical School is working on the programmed cell death of brain tumor cells. Bağcı's study is on a new molecule called the Harakiri (HRK) gene and its significance in programming cell death for brain tumor cells. She aims to find new mechanisms that will be programmed to halt and reverse the progression of brain cancer. "When diagnosed with these types of cancers patients only survive for another year. There is only one medicine in the world that is used to treat this illness. Specialists have discovered the Harakiri gene and now I am working on trying to see if I can activate this gene to program death for cancerous cells. If I am able to achieve this, then I will be working on finding medicine that will increase the activity of this gene," Bağcı explained.

Professor Dr. Çiler Çelik Özenci from Akdeniz University is actually a dentist. However, along with her mentor Prof. Dr. Murat Canbolat she is working on developing a technological device that will be able to obtain sperm from the testicles of men who have no sperm count yet want to conceive. "My professor Murat Canbolat developed a device that receives signals from cells. For example, this device would be used in the case of a sterile male trying to do in vitro fertilization. The surgeon would go into the testicle to try to locate sperm. At present there is a 50 percent chance of being able to do so. With the technological system we have developed, when we use the device at a ten centimeters' distance the chance of locating sperm will increase beyond 50 percent. If not, then there will no longer be the need for repeated biopsies to be conducted on the male testicle. Right now we are doing experimental work. With this device I am hoping to increase the chances of finding sperm from male patients undergoing in vitro fertilization while also preventing damage to the hormones of male patients," said Özenci.

Ege University College of Science Bio Chemistry Department Professor Dr. Dilek Odacı Demirkol is working on biological molecules and disease causing microorganisms. She is trying to create a system of identifying these microorganisms with nano materials. Demirkol's study, which is also supported by TÜBİTAK and involves synthetic DNA/RNA, could be a medical first.

Bilkent University Computer Engineering Department Assistant Professor Dr. Öznur Taştan is working on the HIV-1 virus which causes AIDS. Taştan described her work by stating, "The virus was first discovered 30 years ago. Due to the fact that it constantly undergoes mutation, the virus is showing resistance to medicine. There has been a lot of research done on this interplay. There are two groups of patients. In the first group, the virus progresses fast, while in the second group progression is slower. I want to find out which gene affects the progression of this disease. By establishing statistics, I will be trying to solve the mechanisms that allow HIV to take over the cell. This will allow for the development of individualized treatment methods."

Sabancı University Materials Science and Engineering Department Assistant Professor Dr. Özge Akbulut is working on the design and production of medical diagnosis devices. Through her research she aims to provide more and less expensive access for people to medical services.