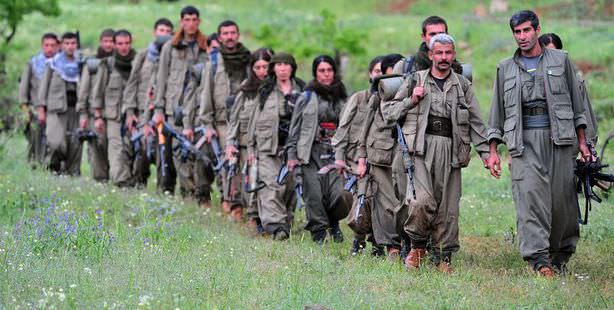 The first PKK group to withdraw that set out on May 8 crossed into northern Iraq on Tuesday. The 13-member group said that the route which would normally take five days to trek took them seven due to rising waters.

The first group of PKK terrorist to begin the withdrawal process from Turkey's territories set out on May 8 from Beytüşşebab. The 13-member group, consisting of six women and seven men, completed their trek to Iraq yesterday morning.

Nearly 30 journalists were brought from Duhok to the PKK camp in northern Iraq's Metina district on Monday to cover the arrival of the first group of terrorists to withdraw. After spending the night at the camp, the group of journalists set out for Iraq's border with Çukurca at around 4:30 am. At 6:25 am, the PKK group began descending from the mountains into the lowlands. The 13-member group, which included six women, was accompanied by three journalists, including columnist Hasan Cemal, for the final hours prior to their arrival.

Once the PKK members crossed over the border, the group's leader Cigerxun Fırat made an announcement stating, "We have come for peace, because we are hoping for peace. That is because this is our leader Abdullah Öcalan's project. His perspectives are directives for us. However, from here on out we want to see concrete developments."

Explaining that they began their trek on May 7, however they were slowed down due to being observed 24 hours by herons, Cigerxun Fırat went on to state, "My name is Cigerxun Fırat. I am the commander of this group that is withdrawing. I have been in the mountains for 15 years. With this step being taken in this process, we left the mountains and have come here. We were caught slightly unprepared, because heading out on a route like this requires detailed preparations. As we tried to get here, we were faced with dozens of creeks that had risen, which were tough to cross through. We were only able to complete this route in seven days, whereas under summer weather conditions it would have only taken us five."

Fırat explained how they were tracked by herons the entire trek by stating, "There were a lot of reconnaissance flights above us throughout the route. In fact, I can honestly say that there weren't as many of these observation flights last year. They were even out flying in rainy weather, whereas in the past they used to not come out on rainy days.

When we saw these reconnaissance planes, we were forced to open up our umbrellas and sit and wait for a long time. However, other than these reconnaissance flights there weren't any operations or military movement. When we withdrew in 1999, we lost nearly 500 of our comrades. This leads to apprehension," said Fırat.

The PKK's withdrawal will continue today and intelligence units will be tracking their movement from a variety of points and will be relaying daily reports to Ankara.

"WE WALKED STRAIGHT FOR A WEEK WITHOUT RESTING"

The group's female commander Savuşka Siirt is just 22 years old. She originally hails from Siirt, however she was forced to migrate to Mersin as a child with her family because their village was burned down. She went up into the mountains while she was at the top of her freshman class in high school. Savuşka explained her experience for reporters by stating, "We have been walking for a week. We hardly ever rested. We would walk through the night and in the day we were forced to wait at certain times due to security reasons. We slept from time to time. We are happy on the one hand and melancholic on the other. That is because we have suffered great losses. However, we are happy because we have experienced a safe and sound withdrawal within the framework of orders from our leader. We will not relinquish our weapons or our uniforms until the Kurdish issue has been solved."