Erdoğan and Obama concur Assad must step down 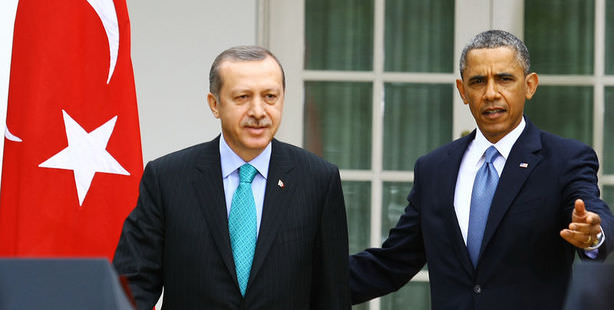 Prime Minister Erdoğan and U.S. President Obama held a joint press briefing following a meeting of delegations that lasted over two hours on Thursday. Syria topped the agenda and both sides agreed that Assad needed to go to allow for a democratic transition in the country in chaos.

Prime Minister Recep Tayyip Erdoğan was greeted with a military ceremony upon his arrival to the White House earlier on Thursday for a meeting of delegations with the U.S. President. In addition to Foreign Minister Ahmet Davutoğlu, Erdoğan was accompanied by Deputy Prime Minister Bülent Arınç, Economy Minister Zafer Çağlayan, European Union Minister Egemen Bağış, Defense Minister İsmet Yılmaz, Energy, Natural Resources Minister Taner Yıldız and AK Party Deputy Chairman Numan Kurtulmuş. Sitting next to U.S. President Barack Obama was Vice-President Joe Biden and Secretary of State John Kerry. Tonight, Erdoğan and Obama will meet one on one as well as attend a dinner at the White House.

After the meeting of delegations, Prime Minister Erdoğan and President Obama held a joint press briefing at the Rose Garden where the two concurred that a democratic transition is needed in Syria without Assad.

Obama began by offering his condolences to the victims of the twin bombings in Reyhanlı and vowed U.S. support in the fight against terrorism. Erdoğan also offered his condolences for the Boston Marathon bombing.

Erdoğan expressed that Turkey is seeking ways to speed up diplomacy to prevent more deaths in Syria, while Obama said that Turkey and the U.S. agree that a democratic process without Syrian President Bashar al-Assad was necessary for a democratic transition to put an end to the violence. ""We both agree al-Assad needs to go," said Obama.

President Obama said there was evidence of chemical weapons use in Syria but that it is important to get "more specific information" to confirm that before deciding how to respond. Obama said he reserves the right to resort to a range of both diplomatic and military options if he receives conclusive proof that the government of Syrian President Bashar al-Assad had used chemical weapons in the country's civil war. "We will continue to increase the pressure on the al-Assad regime and we will continue to work with the opposition," the U.S. president said, while also thanking Turkey and the Turkish public for their hospitality shown to the Syrian refugees.

Obama, who has been reluctant to arm Syrian rebels or become enmeshed militarily in the two-year-old conflict, expressed hope that the United States and Russia would succeed in arranging a peace conference that would produce results. "There are a whole range of options that the United States is already engaged in," he told reporters. "And I preserve the options of taking additional steps, both diplomatic and military, because those chemical weapons inside of Syria also threaten our security over the long term as well as our allies and friends and neighbors."

Erdoğan said Turkey was in "full consensus" with the United States on the need to end the bloodshed in Syria and for a political transition to a government without Assad.

Prime Minister Tayyip Erdoğan said at the White House on Thursday that he intends to go ahead with a planned trip to the Gaza Strip next month despite pressure from the United States to delay it. "I place a lot of significance on this visit in terms of peace in the Middle East," Erdoğan said, adding that he also plans to visit the West Bank on that trip.