Obama hosts exclusive dinner for Erdoğan at the White House 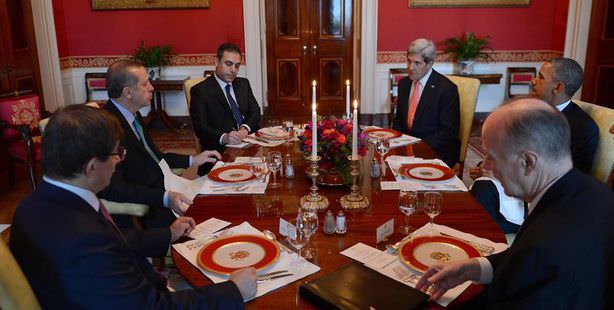 U.S. President Obama hosted Prime Minister Erdoğan for a dinner that went over three hours Thursday night at the White House. Attended by an exclusive few, the main focus was on the crisis in Syria.

U.S. President Barack Obama hosted a dinner held in the Red Room of the White House in honor of visiting Prime Minister Recep Tayyip Erdoğan. Accompanying Prime Minister Erdoğan was Foreign Minister Ahmet Davutoğlu and Turkey's National Intelligence Organization (MİT) Undersecretary Hakan Fidan, while President Obama was joined by Secretary of State John Kerry and National Security Advisor Thomas Donilon. Syria was the focus of the discussion during the dinner, which was held in the White House Red Room and lasted three hours and 15 minutes.

Upon closer inspection of photographs taken of the meal, it was noticed that the table setting for Prime Minister Erdoğan had the knives placed on the left side of the plate, in what was a special show of consideration.

This trip has been especially successful in honoring the strong relations developed between Obama and Erdoğan and the high importance placed on the United States' alliance with Turkey. Despite this trip being an "official working trip", Prime Minister Erdoğan has been the recipient of the highest level of protocol which would usually be in place for a "state visit". Erdoğan was greeted by 56 soldiers hoisting up American flags representing the 50 states and six territories along the route the prime minister followed upon arriving to the White House, where Obama was ready and waiting to greet him.