Two conditions for peace in the Middle East: Syria and Palestine 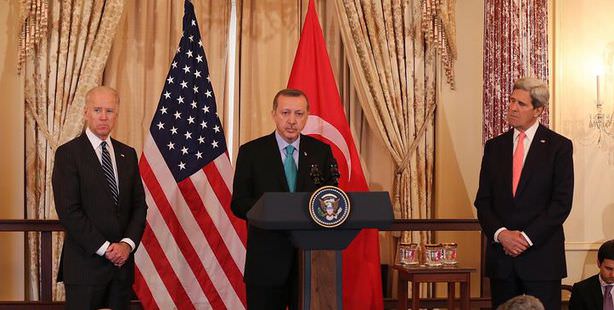 At a luncheon with Vice President Biden and Secretary of State Kerry, Prime Minister Erdoğan stated that solving the situation in Syria and the Palestine-Israel issue is indispensable for establishing peace in the Middle East.

Prime Minister Tayyip Erdoğan attended a luncheon held in his honor at the State Department with United States Vice President Joe Biden and U.S. Secretary of State John Kerry, during which once again the crisis in Syria was the main focus of discussion.

During the luncheon, which was held after Erdoğan's meeting with Obama and a press briefing that followed, Erdoğan emphasized that Turkey's close interest in Syria is aimed at establishing regional peace, which he said could only fruition when a solution is reached on the situation in Syria and the Palestine-Israel issue.

Erdoğan stated the following during his talk at the luncheon with Biden and Kerry:

AN EMPHASIS ON CONSCIENCE: "The main axes of Turkey's foreign policy are built on peace, justice and most importantly a conscience-based approach. Just how our hearts ache from the recent bombing at the Boston Marathon, and just how we are pained by the shooting at women on Mother's Day, when it comes to what is transpiring in Syria we are feeling that same grief."

Kerry: I have been to Turkey more times than I have gone home

U.S. Secretary of State John Kerry welcomed Erdoğan in Turkish with the proverb "Dağ dağa kavuşmaz, insana insana kavuşur" (Mountains may remain apart, but people do come together) and jokingly recalled how he paid more visits to Turkey than any other country in the first 100 days since taking on the position by saying, "I have been there three times already. And to put that in perspective, I have been home only twice."

U.S. Vice President Joe Biden mentioned Erdoğan's hospitality when he paid a visit while the Prime Minister was recovering from an operation only to be invited to the premiere's home where he had the opportunity to be surrounded "with his beautiful children and grandchildren." Biden went on to state, "You cannot comprehend the true meaning of hospitality until you have been invited by a Turkish family into their home."