Emine Erdoğan: In wars, women are hit the hardest 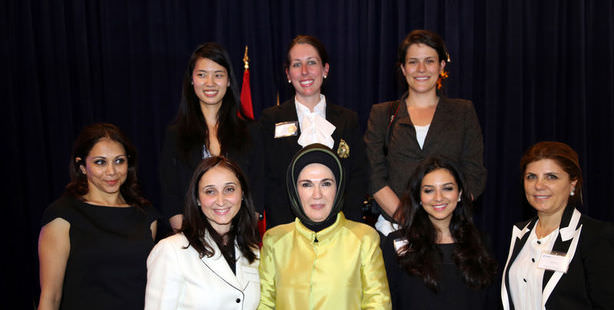 Speaking at a panel on the role of women in peace-building and development at Georgetown University, Emine Erdoğan said that peace should not just be something that is just spoken of.

While accompanying Prime Minister Erdoğan on his U.S. trip, Emine Erdoğan addressed an audience at a panel entitled "Women's Role in Peace-building and Development" held at Georgetown University in collaboration with the Turkish Businesswomen's Association where she drew on the plight of women and children in global disasters and wars and said that peace should not remain something just spoken about.

Pointing out that there are serious issues not only in Iraq, Syria and Palestine but also in other neighboring nations considered close to Turkey such as Afghanistan, North Africa, African nations and especially in Somalia, Erdoğan shared that she has had the opportunity to visit these countries and from what she has seen poverty, injustice, inequality and discrimination is suffered most by women and children.
During her address, Emine Erdoğan went on to relay the following messages:

"When I visited Somalia, a baby died from malnutrition on the way to the hospital. We witnessed the grief suffered by the mother of that child.

These are undoubtedly pessimistic scenarios, however when you look at the role of women in the transformation of North Africa and when we look at the progress women in Turkey have made, we see that there is a bright and hopeful future.

Even though a number of establishments and state leaders have made impressive statements in the name of establishing global peace and development, the anguished tears of women and children have not subsided.

Peace must not remain a concept simply talked about and staved off through aid campaigns that ignite and diminish like a haystack on fire. There needs to be permanent solutions established for women, children and all innocent people. "

A SPECIAL PROGRAM WITH THE FIRST LADY

Michelle Obama warmly greeted and expressed a close interest in Emine Erdoğan and her daughters Sümeyye Erdoğan and Esra Albayrak. The First Lady hosted the Erdoğan's in the Yellow Oval Room at the White House.