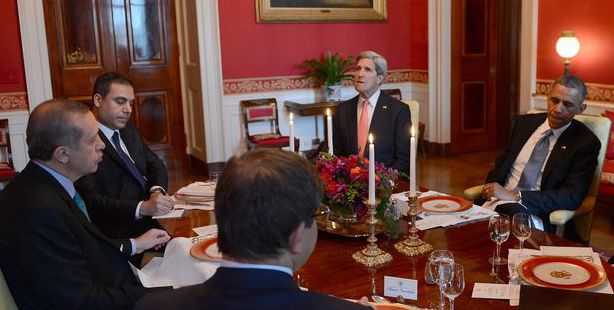 Prime Minister Erdoğan attended a dinner held in his honor by U.S. President Barack Obama on Thursday at the White house, which led to a more thorough discussion of the crisis in Syria.

At the end of a heavily scheduled day for visiting Prime Minister Recep Tayyip Erdoğan and U.S. President Barack Obama, whose government designated a five-hour program of meetings for the visit on Thursday alone, Prime Minister Erdoğan and U.S. President Obama attend an over three-hour dinner in the White House Red Room along with an exclusive few in which they had the opportunity to delve even further into discussing the situation in Syria.

Joining Prime Minister Erdoğan at the dinner held in his honor was Foreign Minister Ahmet Davutoğlu and Turkey's National Intelligence Organization (MİT) Undersecretary Hakan Fidan. Obama was joined by Secretary of State John Kerry and National Security Advisor Thomas Donilon. According to sources, the focus of the discussion was based on establishing a two-prong roadmap. Accordingly, the normalization of Syria will be brought to the top of the agenda in both nations' foreign policy.

The first leg of the road map hones in on Bashar al-Assad and aims to create both internal and external mechanisms that will increase implementing pressure on Assad. Interior support for the opposition will also be bumped up. The second leg of the plan involves the international community and aims to use the influence of international establishments to increase the pressure on Assad to leave.

During the dinner the issue of Erdoğan's impending trip to Gaza was also brought up. Erdoğan expressed that he feels the trip will be significant in terms of normalizing and unifying Palestine and went on to explain that it is for that reason that he will not only be visiting Gaza, but also plans to move on to Ramallah. As a result, the issue of normalizing relations between Israel and Palestine was also brought to the table during which Obama responded to Erdoğan's criticism of Israeli policy by stating, "You know best that I do not approve of certain Israeli policies."

On Friday morning, U.S. Secretary of State John Kerry joined Foreign Minister Ahmet Davutoğlu for breakfast on his final day in the states. Ahmet Doğan, the father of the 19-year-old Turkish-American peace activist Furkan Doğan, who was killed in the deadly Mavi Marmara raid. Doğan handed over a letter to Kerry, which the U.S. Secretary of State vowed to personally deliver to President Obama.