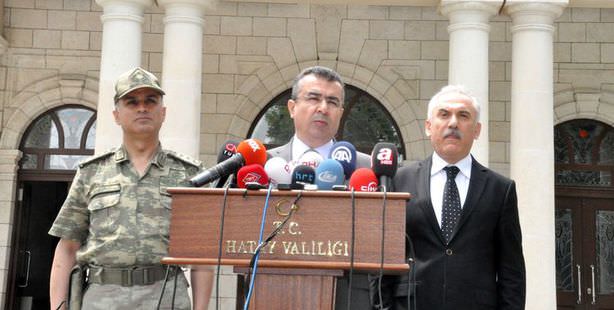 Police have detained a man believed to be one of the main perpetrators of twin car bombings that killed more than 50 people near the Syrian border last Saturday.

Hatay governor Celalettin Lekesiz said police had detained a man identified only by the initials Mehmet.G. shortly before midnight on Thursday in Samandag district, near the Syrian border, and that he was being treated as a prime suspect.

Hüseyin Çelik, deputy chairman of Turkey's ruling AK Party, said the two vehicles used in the bombings were registered to the detained man, and that he had driven one to a blast site in Reyhanlı.

Lekesiz said police were still searching for two other suspected perpetrators, who along with M.G. had been trying to cross over into Syria from Samandağ but had failed because of stepped-up security along the border.

He said the two men were believed to still be inside Turkey. A total of 16 people were in detention in relation to the bombings, Lekesiz said, four of whom were formally arrested.

State-run broadcaster TRT reported on Friday that Reyhanlı's police chief had been dismissed. Prime Minister Tayyip Erdoğan said this week he did not think the attacks were the result of a weakness in the intelligence services, but that there may have been a "disconnect" between them and the police.

Government ministers have said the bombings, which were one of the deadliest attacks in Turkey's modern history, were carried out by a group with ties to the secret service of Syrian President Bashar al-Assad.