“The world is now talking about Turkey” 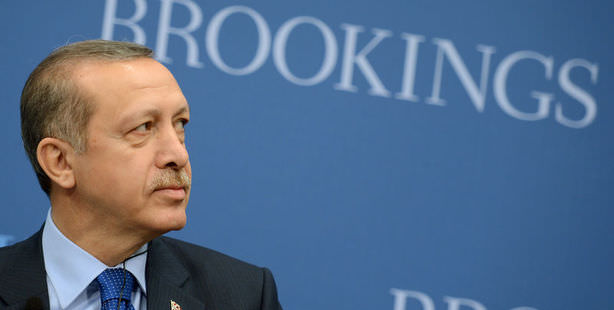 Prime Minister Erdoğan addressed an audience at the Brookings Institute in Washington during which he outlined a series of ‘crazy’ projects Turkey has embarked on as well as the ongoing resolution process and stated, “Turkey is not talking about the world, now the world is talking about Turkey.”

Speaking at the Brookings Institution's Stateman's Forum, Prime Minister Recep Tayyip Erdoğan reflected on three terms of the AK Party (Justice and Development Party) leadership during a period of rapid evolution for Turkey and its role in the world.

The following are a series of excerpts from Prime Minister Erdoğan's address to the Brookings Institution in Washington:

OUR CRAZY PROJECTS ARE BEING TALKED ABOUT: Stating, "Turkey is not talking about the world, now the world is talking about Turkey," Erdoğan relayed details regarding a number of mega projects planned in the country.

"We have an important investment coming up in Turkey now this will be a canal which will connect the Black Sea to the Marmara Sea. This canal will be very important for Istanbul it will be more important than the Panama Canal and the Suez Canal. It will be larger, better quality and its esthetics and architecture will be very different. With this project we want to protect the Bosphorus and create an alternative route for tankers."

A THIRD AIRPORT IN ISTANBUL: "We are building an airport in Istanbul with a capacity of 100 million passengers a year, which would put that airport amongst the top three airports in the world and maybe even the largest one. The reason being is that the current airports do not meet demand, there are delays due to slots and planes are forced to circle when trying to land. We knew we needed a new airport and were criticized for this decision. We announced the tender and there were four bidders, one consisting of a consortium of five Turkish companies which won the tender by bidding over 22 billion, 152 million euros for building and operating the airport for 25 years. The cost of building the airport is 10 billion euros."

A SECOND NUCLEAR POWER PLANT: "The Japanese Prime Minister was in Turkey and as a result of our meetings we reached an agreement and signed for a Japanese-French partnership to build the second nuclear power plant in Turkey, for a cost of 22 billion dollars."

A VITAL PROCESS: "We are now taking a new step, a process for solving the terrorism problem. This is an extremely vital and important process. This ongoing process will be very significant because it will have an important rooted impact on the social life, on democracy and on the economy of Turkey. We are taking a number of steps and these steps also have a bearing on the region, because we can contribute to regional stability and security through solving this problem. Turkey has suffered separatist terrorism for the past 30 years and has lost 40,000 lives as well as incurred a financial burden of 350 billion dollars, so Turkey has paid heavily."

NINETY YEARS OF EXPERIENCE: "Our nation has faced heavy consequences due to the challenge of sovereignty. We have faced heavy traumas in our economy and foreign policy. Our unity has suffered greatly since the foundation of the Republic. Over the past 90 years we have gained important experience and accumulation."

ADVANCED DEMOCRACY: "Turkey has had great achievements with respect to democracy. Over the past ten-and-a-half years, Turkey has entered an era of achieving advanced standards has made irreversible progress while also strengthened sovereignty. Some people still do not accept this fact however we have a government in place that is determined to achieve further democratic progress. Due to this great transformation, Turkey has now become a regional power and a global actor."

WISE PERSONS' COMMISSION: "As part of this resolution process, 63 people selected to take part in a 'wise persons' commission' are now visiting all parts of Turkey in order to hold discussions with the public on resolving the issue of terrorism. This does not mean that they are the wisest people there are nor do we claim that they are. They are just friends, people who got together around a common denominator which is to work together to save our country from the scourge of terrorism. So, what they are trying to do is to contribute to peace in our country so people feel secure and that shopkeepers can open their shops knowing that they will be safe. They are not trying to convince anybody, they are trying to understand what the people think and get feedback. There have not been any separatist terrorism attacks over the past four months."

If met in the middle, Turkey could have a presidential system…

Following his address at the Brookings Institution, Prime Minister Tayyip Erdoğan also responded to questions from the moderator and attendants at the think- tank based in Washington. When asked to comment on Turkey possibly switching to a presidential system, Erdoğan commented, "The late Süleyman Demirel and Turgut Özal also discussed this issue. It has always been a discussion point and I always said that it would be good to look into this and that I am in favor. It doesn't have to be the same presidential system as here in the United States. There are more than 100 countries in the world, developed, less developed or developing countries that have a presidential system we could look at them and prepare a thesis based on those experiences. Then it may either be voted on in a referendum or presented to the parliament for a final decision to be made. It is not something that we must have under any circumstances. If the parliament decides to move into this system then that's what will be done. We know how far the current system has gotten us and I believe it needs to be reformed."

This is a translation of an article originally written by Mehmet Ali Berber and Mehmet Acar.