Erdoğan calls on Obama to mobilize for Myanmar 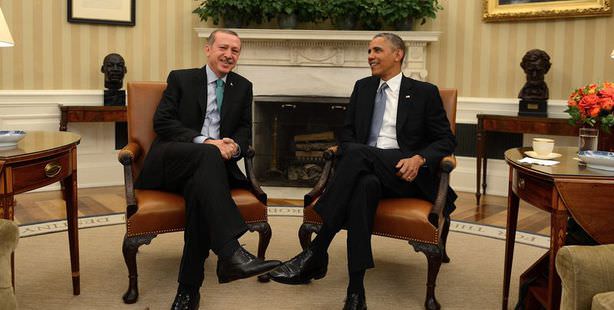 During a one-on-one meeting with President Obama in Washington, Prime Minister Erdoğan called on the U.S. leader to take action against the ongoing massacres suffered by Muslims in Myanmar.

According to details obtained by SABAH, Prime Minister Recep Tayyip Erdoğan devoted just as much time during the meeting to the massacres in Myanmar (Burma) as he did to discuss the crisis in Syria. Erdoğan is slated to have said that the massacres staged by the Buddhist monks against Muslims in Myanmar have now reached massacre-level and is a crime against humanity.

Erdoğan shared that Foreign Minister Ahmet Davutoğlu has not only visited the country in turmoil but has held meetings in order to seek a solution, however, he stated, despite the efforts the massacre continues. Relaying how his wife Emine Erdoğan also visited Myanmar in order to help facilitate providing humanitarian aid to the nation, the Prime Minister said the human tragedy unfolding has now reached the scope of a massacre and asked U.S. President Obama to begin doing something and to take responsibility in the matter.

OBAMA: I WILL STEP IN

U.S. President Obama, who has spoken with President of Myanmar TheinSein regarding the human tragedy in the past also requested that steps be taken to rectify this situation and expressed that he is extremely saddened by what is transpiring there. According to the information obtained, Obama will be making the situation a top agenda item and has assured Erdoğan that he will make a move on the issue. When Erdoğan went in to meet with Obama for a one-on-one meeting he is said to have brought along with him a detailed file on Myanmar. The U.S. has expressed that Turkey's efforts thus far on Myanmar will also be something they can benefit from.

On the final day of Prime Minister Tayyip Erdoğan's U.S. tour, he attended his daughter Esra Albayrak's graduation ceremony from graduate school at San Francisco's Berkeley University. After the ceremony, Erdoğan paid a visit to the university rector where he was relayed information on the school's activities. Erdoğan finalized his U.S. trip in San Francisco and departed from San Francisco Airport aboard the "ANA" aircraft which set off for Turkey.

Meanwhile, throughout Erdoğan's tour of San Francisco, he was accompanied by the same 'secret service' detail which guards both U.S. President Obama as well as Vice President Joe Biden. Prime Minister Erdoğan was ensured the highest level of security by the U.S. government throughout his time in San Francisco.