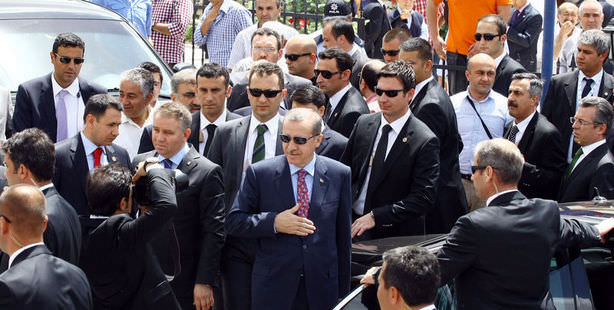 Prime Minister Erdoğan accused CHP leader Kılıçdaroğlu of harming the nation and said that the individuals who took CHP to meet Assad were the very same people who set off the bombs in Reyhanlı.

Speaking at a ruling Justice and Development Party (AK Party) Provincial Chairman Meeting, Prime Minister Recep Tayyip Erdoğan stated that they have documents that prove the individuals that accompanied Republican People's Party (CHP) leader Kemal Kılıçdaroğlu to meet with Syrian President Bashar al-Assad were the same individuals responsible for planning the twin bombings in Reyhanlı, which resulted in 51 deaths.

Accusing the CHP of maintaining the uniform and imposing mentality today that led to the 1960 coup on May 27th 53 years ago. "Just how they asked for trouble then they sometimes do the same now," said Erdoğan bringing up the example of their inexplicable and senseless march from Ataturk's mausoleum carrying signs calling on the military to take over.

Referring to CHP Chairman Kılıçdaroğlu as ignorant, Erdoğan went on to deliver the following messages regarding the main opposition leader:

"We had the opportunity to meet with Obama and other officials. The chairman of the main opposition is truly a political ignoramus. His comment was, 'But you didn't have the Foreign Ministry Undersecretary with you.' How pathetic are you? We had a meeting with three individuals each. Obama was joined by the U.S. Secretary of State and a high level official from the National Security Council. I, in turn, was joined by my Foreign Minister and the Undersecretary of the National Intelligence Organization. What sort of politics do you conduct and what kind of politician are you? You are ignorant," said Erdoğan.

"We have always considered it to be our great fortune that such a novice was sitting in the chairman seat of CHP. However, it has now reached a point that this individual is no longer solely harming the CHP; he has now begun hurting Turkey as well. The pathetic situation that the main opposition party found itself in with the European Parliament has upset us as the citizens of this nation, just as much as it has disappointed those committed to CHP.

The situation the CHP Chairman has found himself in is so tragic that even the Socialist Group leader of the European Parliament refused to tolerate the accusations and criticisms he made and refused to grant him a meeting. Someone who goes abroad and calls their own prime minister a 'murderer' will always be looked upon as 'pathetic'. And in an extremely justifiable manner they refused this pathetic individual entrance through their doors.

He goes out and in an extremely immoral manner says, 'There is just a difference in tone between Assad and Erdoğan.' Yet, CHP has more photographs taken of themselves with Assad then they do with their own people. We now have documents that show that the men who were involved with the Reyhanlı attack were the same men who took members of the CHP to meet Assad. Those who accompanied you were unfortunately the planners of the Reyhanlı incident and were deeply involved. In an unabashed, shameless and rude manner he compares us to Assad. Furthermore, he does so at the European Parliament. The picture that surfaces is one of shame.

By qualifying the legitimate demands of the Syrian public as 'terrorism', the CHP leader has in essence supported the tyrant Assad. CHP's stance is in no way objective. CHP has overtly supported the side of an oppressive dictator," stated the Prime Minister.

THE START TO THE ELECTIONS

Erdoğan gave the start signal for the two elections and potential referendum he announced may be held in 2014. "As of today, we have two main items on our agenda. One is the election. The second is a solution. I want you to focus on both with great emphasis," Erdoğan told his AK Party group. During the meeting, which lasted approximately five hours, Erdoğan listened to his party's provincial chairman as well as leaders from the women and youth wings and in reference to the ongoing resolution process, said, "This can't be based just on what I say, you need to also explain your objectives and efforts regarding this process."

"WE ARE NOT BANNING ALCOHOL"

Prime Minister Erdoğan also commented on the recent bill banning alcohol advertising and tightened restrictions on its sale that was passed in the assembly on Friday by saying, "We don't want a generation wandering around in a merry state day and night."

"We are not banning alcohol in Turkey," Erdoğan said, then referring to Article 58 of the Constitution which deals with protecting the youth, "A state will naturally protect its youth, its people from bad habits. Shall we instead be promoting it?" Erdoğan argued that such regulations were not unseen in western countries as well.

"There are regulations such as these all over the world. The youth of a nation should be protected from bad habits," Erdoğan said as he underlined that they did not wish to have a drunk, wasted youth. "Turkey's youth should be alert, alive and equipped with knowledge. This is the kind of generation we want and we are steps to this effect."