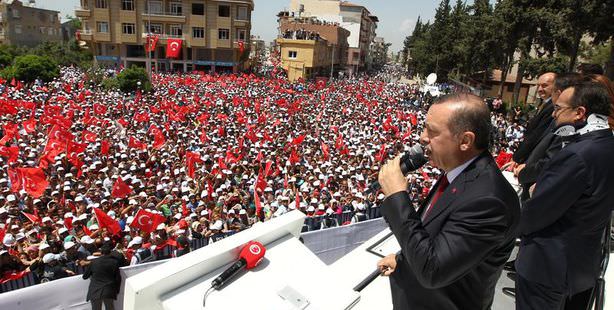 Prime Minister Recep Tayyip Erdoğan has gone to Reyhanlı to examine the fallout of the bombing attacks on the border town in Hatay that resulted in the deaths of 51 and injuring dozens of civilians.

Prime Minister Recep Tayyip Erdoğan, whose flight arrived at the Hatay Airport at 12:15 was, greeted by Minister of Justice Sadullah Ergin, Hatay Governor Celalettin Lekesiz, and the congressmen representing Hatay. Heavy security measures were in place on both the ground and the air anticipating the Prime Minister's arrival. A police helicopter and three military helicopters patrolled the skies as the local police and Special Forces teams formed a perimeter around the airport. Members of the press were not even allowed to approach the airport.

Prime Minister Erdoğan addressed the public in front of the Reyhanlı Municipality building where the first attacks took place, stating;

"Those showing efforts to continue their reign, their dictatorship have been an detriment to our peace here in Turkey.

We did everything in our power to strengthen Syria.

Our people throughout time have sought to assist the underdogs around the world.

Our persecuted Syrian brethren escaping the tyrant Assad in Syria did not come here for the sake of enjoyment.

You opened your arms to our brethren; do not dare compliment those seeking to evict them from here.

We will under no circumstance entice seduction and unrest.

When the dictatorship in Syria comes to an end, our brethren here will return to their homes.

Hatay will become a big city. Reyhanlı will overcome this in the best way possible."

ON HIS ARRIVAL TO REYHANLI

It would have been evaluated differently if I had arrived here at the time of the attacks. There are those who would have exploited this.

We have never left you to fend for yourselves as a state nor as a government, and we never will.

Do not dare entice those that want to cause unrest amongst us, because they fear our unity.

Those that come from Syria are our brethren. Do not say disrespectful things about them.

We did not come here out of politeness, we came to serve you," said Erdoğan who also vowed to return to Reyhanlı soon.