"The name Hezbollah should be changed to Army of the Devil” 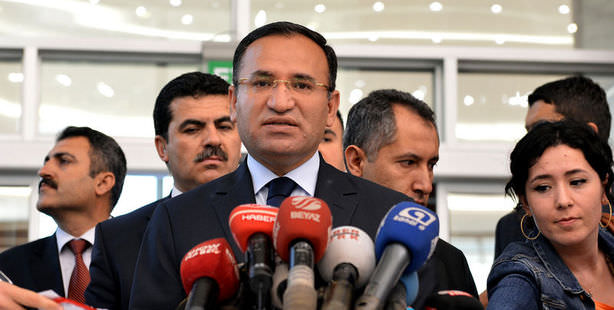 Turkish Deputy Prime Minister Bekir Bozdağ dished up criticism of Hezbollah’s alliance with the Assad regime and stated that the militant group should change its name to “Army of the Devil”.

Speaking at a conference dealing with the problems and their solutions of the Islamic world at the Sixth International Risale-i Nur and Islamic Unity Symposium in Ankara, Deputy Prime Minister Bekir Bozdağ stated, "I repeat, openly and clearly that Hezbollah (which, in Arabic means Party of God) needs to the changed to Army of the Devil. Not only do you call yourselves Hezbollah, but they also declare war against innocent women, children and the elderly, people they don't even know. How ridiculous is this? How is this sort of understanding possible?"

Criticizing the fact that Hezbollah has now sided with Assad, Bozdağ went on to state the following: "I am saying this from here; you say 'I stand by Assad'. Well where do you get that strength to kill fellow Muslims, fellow brothers? It is not from Islam, nor is it from the Koran. To want to pit Muslims against one another is satanic."

The Deputy Prime Minister recalled the story of Pharaoh who ordered the killing of a young child based on a dream and said, "This exists in every era. Then it was Pharaoh and now it is someone else. Can someone please tell me what is the difference between what Assad is doing now and Pharaoh's actions in the past? Rain death on hundreds of thousands from the air, land and sea and then portray yourself as someone who is adhering to the human rights dictated by Allah."

Underlining that those who do not derive inspiration from the Koran have no right to speak on Islam, Deputy Prime Minister Bozdağ stated that the issue of sectarianism needs to be well understood by all.
"Iran needs to comprehend well where it stands. Maliki needs to also understand where he stands. In Turkey, we all need to see to which point certain people are attempting to drag us. We all need to be very aware of the flames intended to be ignited within the Islamic world. All sects are simply solid examples of attempting to understand the Koran and tradition. None are the Koran itself, these are just guides," said Bozdağ.