President Gül: We are pleased the EU has lifted the Syria weapons ban 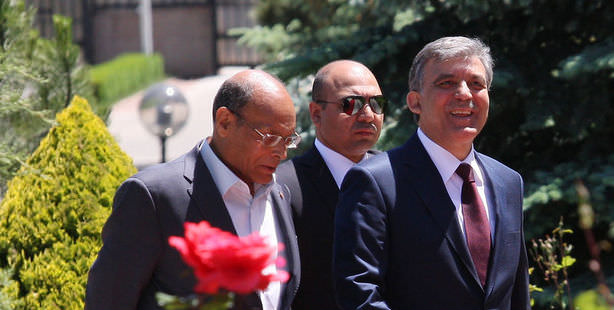 President Abdullah Gül announced yesterday that Turkey welcomes the move by the international community to lift the embargo on supplying arms to the Syrian opposition.

President Abdullah Gül commented on the lifting of a ban on supplying arms to the Syrian opposition by EU nations during a press conference held with his visiting Tunisian counterpart, President Moncef Marzouki. The decision to not renew an arms embargo on providing weapons to the Syrian opposition was made on Monday during a meeting of EU ministers in Brussels, with England and France's unwavering insistence in being granted the ability to supply arms to the opposition forces battling Assad's dictatorial regime being a key factor in the lifting of the ban.

President Gül welcomed Tunisian President Marzouki at the Çankaya Palace on Tuesday by firing a 21-gun salute. After the playing of both nations' national anthems, Marzouki greeted the military procession in Turkish by stating "Merhaba asker." After holding both one on one and joint committee meetings, Gül and Marzouki attended a press conference during which Gül commented on EU nations lifting the ban on providing arms to the Syrian opposition by stating, "We are extremely saddened by what is transpiring in Syria. The Syrian public set out with demands for further liberties, justice and democracy. For the first time in world history we are beginning to see the use of ballistic missiles within a country. We have always exerted efforts in order to ensure the public is not further crushed and bigger massacres do not occur. We welcome the decision by the international community to stake a claim and stand up for the Syrian opposition."

Gül went on to note that what is transpiring in Syria has transformed into proxy battles in which distant representatives of the state are waging wars. "This presents a much greater danger ahead. We must ensure this sort of opportunity is not provided. In order to so, responsibility falls on the shoulders of leaders and of course everyone. The greatest responsibility lies with those running Syria."

'OUR YOUTH HAVE BEEN PERSUADED'

Marzouki announced that they will continue to follow Turkey's path. Expressing their support for the Syrian public, Marzouki stated, "We wanted them to break free of this dictator. However, it has transformed into something else. We will support a political solution and the unification of the opposition. However, our youth have been persuaded to join the war in Syria. They are being trained there, which is something we do not believe is right."

Later in the day Marzouki met with Prime Minister Recep Tayyip Erdoğan at the Prime Ministry Official Residence for a half-an-hour meeting. Marzouki also had the opportunity to meet with Foreign Minister Ahmet Davutoğlu who visited him at the Swissotel where he was staying.