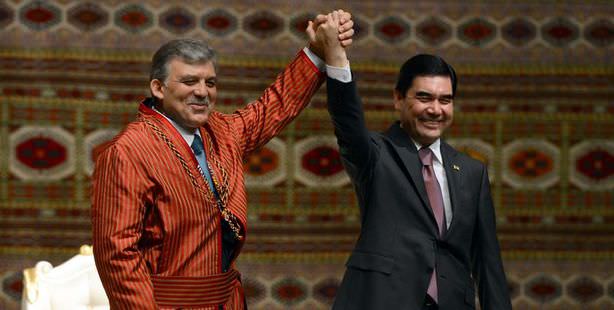 President Gül, who was welcomed to Ashgabat by Turkmenistan President Berdimuhamedov with a military parade and awarded with a Turkmenistan state medal, stated, “The ‘active neutrality’ policy of our Turkmen brothers’ serves global peace.”

Paying a state visit to the Turkmenistan capital of Ashgabat, President Abdullah Gül was awarded a state medal by Turkmenistan and signed a joint memorandum with Turkmenistan President Gurbanguly Berdimuhamedov, who referred to him as 'brother'. Twelve collaboration agreements were also signed during the president's official state visit.

During the ceremony held in the Ruhiyet Palace in which Gül was awarded with a state medal, the president stated, "The unique cooperation between two brother countries, Turkey and Turkmenistan, serves the mutual interest of our people. I want to thank you with all my heart for this courtesy of granting me the first ever Turkmenistan state medal."

During the ceremony, President Gül delivered the following messages:

"During Your Excellency's visit to Turkey last February, I also decorated him with the Republic of Turkey State Medal. These two state medals are the strongest symbol that the 'bone brotherhood' between our nation and our people will last forever.

Turkmenistan is Asia's rising force. The 'active neutrality' policy of our Turkmen brothers serves international peace just as much as it serves regional stability and welfare."

President Berdimuhamedov stated that Turkey, which has become a bridge of friendship between Europe and Asia, is playing an important role in the establishment of permanent global peace and security, which he said is enhancing its prestige in the international arena. Berdimuhamedov pointed out the importance Gül places on developing relations between nations and said, "This respected son, the President of the Republic of Turkey Abdullah Gül is exerting efforts to strengthen the friendly and brotherly relations between these two nations."

Gül and Berdimuhamedov met both one on one as well as with joint delegations after which they signed a joint memorandum as well as 12 cooperation agreements. During the ceremony, Gül stated that relations between Turkey and Turkmenistan have grown over the past five years in which they have mutually paid five visits to one another.

Pointing out that the joint trade volume between the nations has reached 3.5 billion dollars, President Gül emphasized that the open door and neutral policy followed by Turkmenistan has granted the nation an important status in the region as well as the world.

Gül also announced plans for energy cooperation and stated, "Both Turkey as well as Europe through Turkey will open up to Turkmenistan." The president also revealed that they are developing highway and train projects to provide access to Europe from Central Asia through Turkmenistan.

Berdimuhamedov shared that the issues of peace and security were central during the meetings, noting that the stance exhibited by both countries were similar. Pointing out that Turkey is one of Turkmenistan's economic partners; Berdimuhamedov stated that joint trade volume has multiplied by one-and-a-half over the past two years.

During the ceremony, 12 collaboration agreements were signed in a number of areas including judicial issues, agriculture as well as youth and sports

While Energy and Natural Resources Minister Taner Yıldız and Turkmenistan Council of Ministers Chairman Baymurat Hojamuhammedov signed on to a framework agreement for the transport of natural gas from Turkmenistan to the Republic of Turkey, Turkish International Cooperation and Development Agency (TİKA) President Serdar Çam and Turkmenistan Council of Ministers Deputy Chairman Sapardurdi Toyliyev signed a cooperation agreement to locate and restore the tomb of Sultan Alparslan.

President Abdullah Gül was also the recipient of an honorary doctorate by the State Institute of Turkmenistan Economics and Public Administration. President Gül qualified the disintegration of the Soviet Union as a 'strategic miracle' which allowed for brotherhood nations to claim their independence. "Our countries, where we have lived together throughout history, have always been the symbol of unity and peace."

President Gül also attended a dinner hosted in his honor by his counterpart Gurbanguli Berdimuhamedov. During his stay, Gül also paid a visit to the Olympic Village, which is being built by a Turkish firm, in order to inspect the progress. Later, president Gül attended a dinner held in his honor by his Turkmen counterpart Berdimuhamedov at the Oğuzhan Palace. Referring to 2012 as a 'golden year' for Turkmenistan and Turkey, Gül stated, "The nearly 8,000 of our youths that are studying in both nations are the guarantee of our joint future."