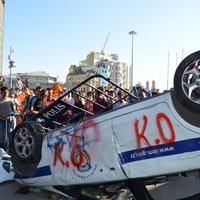 The event that grew as the gathered protestors to stop the construction of a shopping mall, were pepper sprayed in Gezi Park, the events were turned into chaos over Facebook and Twitter.

Celebrities, musicians, and even politicians joined in the spreading of messages such as "The death toll has reached 500, and tanks have run over small children."
They sought to turn a protest to protect the trees into chaos.
The provocateurs that sought to turn the conflict between the police and protestors into chaos took to Twitter and Facebook.
The provocateurs that sought to draw more people to Taksim to stand off against the police forces sent messages such as "At this moment the police in Taksim are using live ammunition. At least 500 are dead! A person died getting run over by a panzer, come out to Taksim."
At the same time breaking news on Taksim from Twitter suggested that 400 were in injured, 10 people
were concussed, 3 people lost their eyes, and one person had their ear torn off. Among those spreading
such news was CHP parliamentarian Aygün.
Batum and Cihaner fed the flames
Aygün, gave support for the protests tweeting such messages like "News from Turkey's Tahrir Taksim Protest: 2 dead, one severed arm in critical condition." By announcing the events differently than they happened, some tried to appeal to different crowds and raise tensions between groups.
Provocateurs used a photo taken from the internet, and captioned and shared it with "Police panzers ran over and killed a child." Another viral message was that police officers were handing out water bottles that were drugged to put protestors to sleep in order to arrest them.
CHP representative İlhan Cihaner wrote that "They said the hundreds of thousands that gathered in in Taksim were moldable and stupid!" while CHP representative Süheyl Batum, wrote "Today is the day of children that kept silent till today. The dictatorial ambitions are coming to an end. Youth, the light is near."
It turned into an organized movement
Police sought to locate those that were spreading false news in order to gather more protestors. It was announced that investigations on the topic have begun. The social media messages are accredited for the mass in fluctuation of the number of protestors. There were also protests held in Brussels and The Turkish Republic of North Cyprus.
Some examples of the provocative tweets
- News from Turkey's Tahrir Taksim Protest: 2 dead, one severed arm in critical condition
- Some citizen:"I am at Taksim now police are using live rounds. At least 500 dead! 10 police are on top of
me now, I am writing this tweet under very difficult situations."
- Last Minute: 400 wounded 5 heavily. 10 concussed 3 lost their eyes. 4 Dead.
- Taksim; 400 wounded 5 heavily. 10 concussed 3 lost their eyes. 4 Dead.
- Taksim the allies have lots of dead and wounded animals.
- What we were told by the Taksim First Response Hospital "There are 2 dead in the morgue."
- 8 dead thousands wounded, JUST ONE SOUL Everywhere is Taksim everywhere is resistance.
- GFB and Besiktas fans are trapped in the Taksim Metro's Tunnel! There are 3 dead and 2 wounded on the street!
- It is said there are nearly 30 dead…
- First hand news, there is one dead at the Taksim First Response Hospital
- Some Citizen: INFO: 27 dead civilians and 7 police in Taksim
The police withdrew and the park opened
The protest ended with the last police withdrawal after 5 days. As the police were withdrawing from Taksim they faced rocks thrown by marginal groups once again igniting tensions. Minister of Internal Affairs Güler stated that between 48 and 90 joint demonstrations were held at Gezi Park, that 939 people were brought under questioning, and a portion of them were release. Güler also mentioned that 26 police officers and 53 citizens were injured.

Opposition, and millitant groups took to social media to show the situation in a much more terrifying light, by doing so causing disorder among the public. These groups due to their political differences with the democraticly elected and majority holding AK Party attempted to and with some degree of scuess were able to cause disorder and and further complicate the situations in Taksim and other large cities in Turkey, while claiming that the AK Party was a dictatorial force.
Last Update: Jun 02, 2013 2:56 pm
RELATED TOPICS