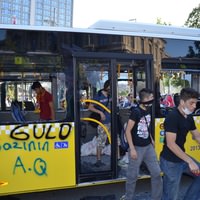 Friday and Saturday saw protests in urban centers throughout Turkey, most notably Taksim Square in Istanbul.

What started as a protest to protect the greenery of Gezi Park in Taksim, through the involvement of protestors with questionable motives and a physical police response soon turned parts of the city into pandemonium.

A question does come to mind though, if the protests were about keeping Taksim's greenery alive, and preventing the defacement of the neighborhood, why did many of the protestors so willingly take part in public vandalism?

Why would one deface a neighborhood they love so dearly, attack local bus stops, electrical boxes, stores, hotels and even go as far as to set fire to a structure within the park they are trying to protect?

Well the truth is though some of the protestors were still true to their intentions, others, like the militant Devrimci Halk Kurtuluş Partisi-Cephesi made their intentions clear. Dressed in full demolition gear the militant protesting groups used whatever they could get in hand to cause destruction to the local environments, ranging from removing street signs to using metal bars torn from construction scaffolding to break the windows of nearby structures.

Unlike the Arab Spring that these protests have now often been compared to, these protests though large in scale, were not of the majority against an oppressive minority. The protests in Egypt resonating in Tahrir Square had put the whole country in a dead lock as life in cities came to a stop. The reason for this was the massive public backing for the movement. While in Istanbul, just 2km from Taskim life was normal in the residential neighborhoods.

The reasons behind this is that no matter what is said and the scale of the protests, the AKP was a democratically elected party which still has a majority of the support. The police, who responded with to assault and agitation with aggression are still backed by large portions of the public, as they field an unending stream of calls from civilians asking them to put down protests in their neighborhoods.

As an outcome of these events the state has been criticized as being an oppressive police state, though abroad the same police actions have been seen for protests where assault, vandalism and public endangerment were not issues. Take for examples the Occupy Wall Street protests in New York, where peaceful civilian protestors faced similar abuse. A protest like this would not have even been given the opportunity to take place in other countries such as the United States, for protesting without permission and permits is an offence which would result in arrests before the protest could gain momentum. But in other foreign cases, the protests were peaceful.

It is a shame that militant groups that joined in the peaceful protesting, through their provocations lead to the harming of others who remained committed to the actual intent of the protests.
Last Update: Jun 02, 2013 10:50 am
RELATED TOPICS