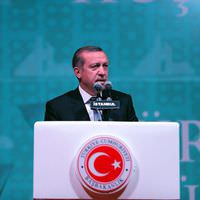 Today Turkish Prime Minister Recep Tayyip Erdoğan gave a speech issuing a response to the protestors as well as speaking on the future of the Balkans.

"As a people in the recent past we have experienced great pain. The Balkan pain is one in our souls we are unable to get rid of. Hundreds of thousands of our people were torn from their lands."
"Never has the world approached the Balkans in a way that challenges us the way we have."
"There are those who oppose Macedonia's entry into NATO only because of its name, Turkey is the only country supporting them."
"The Balkans are a part of us with all of its ethic groups. They friends, our neighbors, actually our family."
"Mehmet Akif was an Albanian, yet he wrote the Turkish National Anthem."
"As he said those words he said them as someone that was not born here."
"However we look approach our cites here we approach our cities in the Balkans the same way."
"The latest example is the proper restoration of Gazi Mustafa Kemal's father's house in Macedonia.
"God willing we will construct a mosque in the center of Pristina."
"We are constructing a period that has been ignored since 1912."
"In Bosnia they (the west) demolished the Mostar Bridge. We constructed it."
"Aliya was laying sick in bed in Bosnia. When I visited him he recognized me and we began to speak. The last thing he told me is, "You will not stay far away from these lands you will not ignore here" and the next day we got word of this passing."
Then Prime Minister Recep Tayyip Erdoğan went on to speak about the Gezi Park protests:
"As a people we fell prey to many different games. To invasions and to terrorist attacks we fell prey. We got past these by being one and together. At the moment we are taking very important steps in the resolution process. Three hundred billion dollars was spent on the war on terror in the past 30 years."
"We are once again living the traps of the past to provoke the government. Oppositions that cannot find organized success are turning to enticing street protests."
"If the issue is planting trees we are providing every opportunity. They are vocalizing that we are committing a genocide on trees."
"Did you do all of this because of the 12 trees at Gezi Park. We are not proposing to remove Gezi Park from the area. In actuality we want to make a cannoning barracks."
"We are pedestrianizing Taksim Square. The "mall" we are constructing here doesn't carry the international meaning of "mall." There isn't a certain plan yet either. Maybe we will make a city museum. This isn't the issue anyway, it is halting a well going Turkey."
"They go around breaking and burning as they please, is this democracy? (Apparently) Tayyip Erdoğan is a dictator. If they can make this comparison with our country there is nothing to say about this."
Last Update: Jun 02, 2013 2:40 pm
RELATED TOPICS