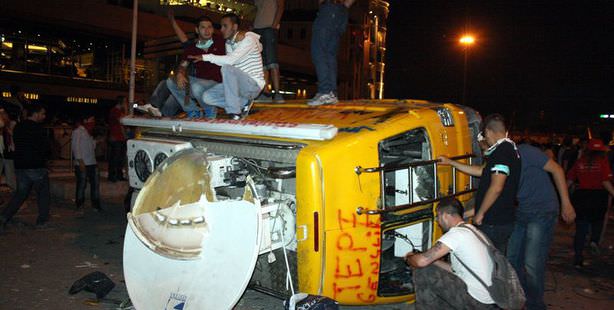 There have been numerous attacks staged on nationalist news stations and journalists with protesters vandalizing broadcasting vans and even attempting to lynch reporters.

A crowded group which was demonstrating in Beşiktaş Square began throwing stones at police vehicles parked waiting in front of the Prime Ministry Working office. Unable to contain themselves, they then proceeded to attempt to lynch reporters on the scene. Meanwhile, other protesters were seen trying to stop the group from throwing stones.

The group of demonstrators proceeded to hang a Turkish flag on the police Mass Incident Intervention Vehicle's, abbreviated as TOMA in Turkish. The demonstrators that were throwing stones at the police also made an attempt to lynch the reporters who were covering the developments.

The demonstrators attacked the reporters with stones and bottles forcing the journalists to seek shelter in the press center located within the Prime Ministry Office. The reporters were forced to hole up in the center until the crowds dispersed. As the tension continued to remain escalated, the groups spread out into side streets with other demonstrators.