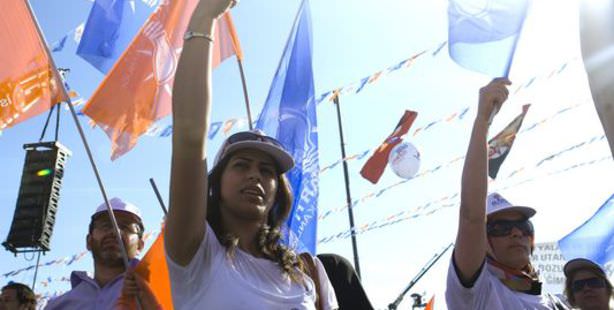 In a poll conducted by MAK Consulting in 51 provinces excluding major municipalities, AK Party received an overwhelming majority of support, while six provinces were in favor of CHP and four provinces each showed majority support for MHP and BDP.

As Turkey's political parties continue their ongoing preparations for the local elections next year, a public survey conducted by MAK Consulting and Research Firm presents a series of striking results.

The survey, in which citizens were polled from 51 provinces, excluding major municipalities, shows that the ruling Justice and Development Party (AK Party) maintains its top position in terms of support in 28 provinces, main opposition Republican People's Party (CHP) came out on top in six provinces and in four provinces each nationalist opposition Nationalist Movement Party (MHP) and the nationalist Kurdish opposition Peace and Democracy Party (BDP) garnered the highest level of support. In nine of the provinces polled, differing parties tied for collecting the highest level of support.

According to the survey, the AK Party's level of support was represented as follows:

The following is a listing of the percentage rates in provinces CHP, MHP and BDP led in support:

According to the survey, the AK Party and CHP were tied for the highest level of support in the Artvin, Bilecik and Bolu provinces.

MHP and AK Party tied as the top parties selected in the Gümüşhane, Isparta, Uşak and Kars provinces, while the AK Party shared the same level of support with BDP in Siirt and Şırnak.

In other provinces, the levels of support shown for parties were significantly close, with the AK Party leading by just one point difference between the MHP in Çankırı and by two points in Düzce, Bayburt and Niğde.

In provinces which exhibited the highest level of support for CHP, the percentiles of those in favor of the AK Party followed by one point in Giresun, three points in Çanakkale and six points in Edirne.

According to the results, the AK Party garnered the highest level of support in Prime Minister Tayyip Erdoğan's hometown of Rize with 65%. In Rize, the Saadet Party followed with nine percent, CHP with seven percent, MHP with six percent and remaining parties received 12 percent in total.

In Osmaniye, from where Devlet Bahçeli the Chairman of MHP hails, MHP beat out the AK Party by just one percentage.

While 42% of those polled in Osmaniye support the MHP, 41 percent are in favor of the AK Party, seven percent selected CHP, three percent want BDP, the SP and BBP received two percent of the vote each and support for the remaining parties was at three percent.