President Gül: “The state got the well-intended messages from the people” 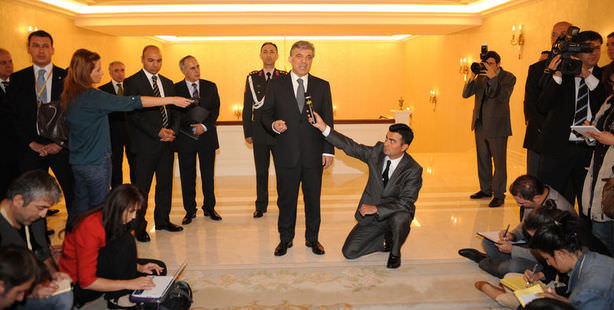 President Gül made a statement about the ongoing protests that have started in response to the government’s plans to redevelop Gezi Parkı in Istanbul’s Taksim Square.

Speaking to reporters in Ankara on Monday, President Abdullah Gül stated that the well-intentioned message from the Ankara and Istanbul protests has been received and called on the public to calm down.

Underscoring that Turkey is a country which has a well-functioning democracy, President Gül said that in Turkey, people have every right to take litigations to the Court of Appeals if they have any objections to the verdicts given by lower courts, so he stressed there are ways for people to object, pointing to the fact that Turkey believes in the supremacy of law and the rule of law. Turkey has a system as per the Western standards of democracy, he emphasized. All views and opinions no matter how different they are from one another are respected in Turkey, declared the President. "This should be the case in a free country. Everyone should respect each other's beliefs and views as we do in Turkey."

President Gül continued as follows: "Democracy does not mean simply elections. It is natural for people to reveal their objections or different views through different means such as demonstrations. Therefore, I consider the recent incidents in our country to be part of this fact. The state has got the well-intended message."

Calling on everyone to act responsibly, President Gül pointed out that criminal organizations can get involved in such social events, turning these events into unwanted incidents and wrongdoings. "I am calling on our citizens to act with common sense. Everyone should conform to the rules and express their objections in peaceful ways, using peaceful means. We should not allow any actions that could spoil our image in the world."

Referring to the great development and progress Turkey has achieved in the last decade, President Gül noted that building a good image takes years and said that everyone working together has made tireless efforts to build today's image of Turkey, raising the level of the country in every area. This country belongs to us all and we should cherish it, said the President.

In the recent events, President Gül continued, Turkey's democracy has been tested and he further stated that the whole world has seen how such demonstrations in non-democratic countries were responded to and how much they cost, adding that Turkey, in contrast, has gone through these events without any irreversible results. From today on, President Gül suggested, everyone should remain calm, allowing no harm to be done to the country.