Protesters present demands from the government 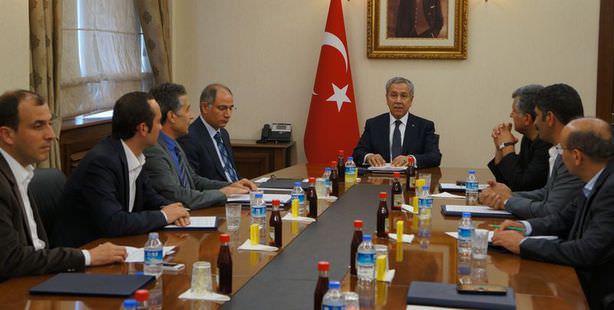 * Let the Gezi Park remain as is and do not forbid demonstrations in Taksim. * The governors and police chiefs of three provinces should be removed from duty. * Prohibit the use of tear gas. * Release those detained in protests.

The first meeting with representatives of the protests on the demolition of Gezi Park took place yesterday in the capital. Deputy Prime Minister Bülent Arınç, formally in charge while Erdoğan is away, has struck a more conciliatory tone, apologizing for the initial police crackdown on peaceful campaigners in Taksim's Gezi Park and met with a delegation of protesters from the Taksim Platform in his office in Ankara.

The demands presented in a written document to Arınç by the Taksim Platform are as follows:

* The Gezi Park should remain untouched and as a park. An official statement should be released by the state announcing that the project to rebuild the historic Ottoman Artillery (Topçu) Barracks has been cancelled and to ensure that no other development will take its place. Efforts to demolish the Atatürk Cultural Center (AKM) must also be abandoned.

*We demand the removal from duty of those who gave the order to inflict force which led to the wounding of thousands and the deaths of two citizens, starting with the governors and police chiefs of Istanbul, Ankara and Hatay.

* The use of tear gas and similar materials should be prohibited.

* Our fellow citizens who have been arrested for participating in the resistance should be released immediately and an announcement made that none of them will be subjected to an investigation.

* The prohibitions of meetings, demonstrations and protests in all squares in Turkey, including the Taksim and Kızılay squares which are traditionally used for May 1st gatherings, should be lifted and all police interventions put to an end.

* That the protests for which Gezi Park now symbolizes is actually a response to the perception of the government's mentality of attempting to alter our lifestyles and beliefs which they hold in contempt.

Speaking to the press following the meeting, Union of Chambers of Turkish Engineers and Architects (TMMOB) Chamber of City Planners Istanbul Branch Director Tayfun Kahraman stated, "We would like to relay the following to those in power: The rising reaction is also in response to the plans to build a third bridge over the Bosphorus, a third airport in Istanbul, the Canal Istanbul project, plans for the Atatürk Forest Farm (AOÇ) and hydroelectric power plants (HESs) and attacks on the people's ecological values and objections to the Nature and Biological Diversity Conservation Legislative Draft." Kahraman went on to add that the government should be aware of "the stance against conflict in the country and in the region, the sensitivity of our Alevi citizens, the justified demands of the victims of urban transformation, the voices rising against conservative male politicians exerting control over women's bodies, the resistance against the requirements by universities and the pressure exerted on the judiciary and artists, the demands in response to all workers, including Turkish Airlines (THY) staff being robbed of their rights, the struggle against all sexual orientation and discrimination of gender identity as well as demanding all obstacles be lifted to citizens' access to education and medical rights."