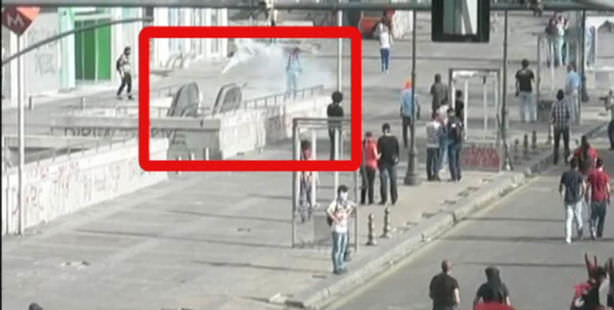 Illegal organizations continue to stage provocations in the capital Ankara…

What started as a protest for redevelopment plans in Taksim Square which involved cutting down a number of trees in Gezi Park has now escalated to something quite different and with the inclusion of marginal groups in demonstrations the situation is beginning to get out of control.

Footage captured on city surveillance cameras (mobese) only bring to mind the question, "Is this how you seek your rights?"

The images of violence caught on city surveillance footage in Ankara are also drawing in harsh responses from demonstrators who were sincerely pursing their right to protest the redevelopment plans.

In footage recorded in Ankara, a group of activists are caught furiously beating a police officer. While dozens of people proceed to kick and knock about the police officer, some of the group's members are seen attempting to stop the attack on the officer. After the beating, which went on for minutes, the group then tosses the police officer to the side of the road.

Another incident caught on footage in Sıhhiye shows a group of activists breaking the windows of a construction vehicle which they then enter and start up. The group is later recorded driving the bulldozer towards the capital's Kızılay Square.

Mobese cameras also caught imagery clearly proving that marginal groups are being given direct orders from certain individuals on how to conduct themselves during the demonstrations. In Ankara's Kızılay district, footage shows masked member of a group hiding behind trees on Atatürk Boulevard as they prepare to stage an attack on police. Amongst them is a woman with short hair and wearing glasses who visits each group to deliver orders for what their next move will be.

Yet another incident caught on camera in the capital involves footage showing activists throwing a tear gas canister shot at them by police into the metro station. The intention being of course is to pit citizens against police. Those that were left suffocated from the effects of the tear gas that engulfed the underground station are also being subjected to propaganda that "police are now bombing metro stops."