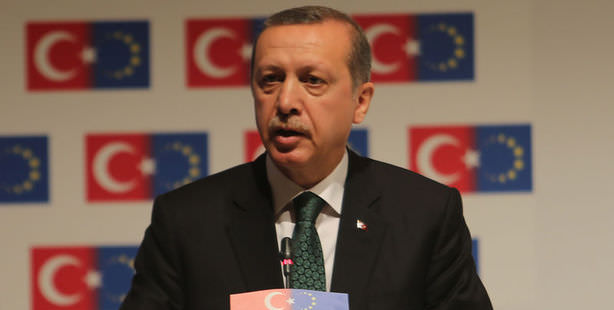 Speaking at a Ministry of European Affairs “Joint Future for Turkey and the EU” conference in Istanbul on Friday, Prime Minister Erdoğan let up slightly on the Gezi protests which he called a ‘campaign of lies’ and said that what they are against is violence and vandalism. Erdoğan also said that if the same situation were to occur in an EU country there would have been an even harsher response.

Friday's speech marked the second address by Prime Minister Recep Tayyip Erdoğan since his return from a three-country tour of North Africa. In the early morning hours of Friday, the prime minister was greeted by tens of thousands at the Istanbul Ataturk Airport, where he called for an immediate end to the protests. Later in the day on Friday, Prime Minister Erdoğan attended an EU Ministerial Affairs conference in Istanbul, during which he both addressed the nationwide protests and also dished up criticism of the EU's extended accession process for Turkey.

The following are a series of excerpts from Erdoğan's address yesterday at the EU Ministers' meeting:

"We are expecting the opening of chapter 22 on June 26th to continue in ordinary fashion. We also expect those who are handling Turkey's EU accession to conduct self-criticism.

The EU needs to stop failing to fulfill the promises they have made to Turkey. Turkey will never be a country you have wait at the door. For Europe to turn its back on Turkey is equivalent to turning their backs on their own historical values.

The unjust visa regime has begun to put Europe in a compromising position. The visa regime does not exist in the EU legal acquis.

The EU needs to honestly admit why it is they haven't accepted Turkey. The Turkish public needs to be informed as to why this process has taken so long. We are already virtually in the EU. Come and let's make this official.

It is not possible for the EU accession process to continue one-sided. The EU's hesitant stance has fanned off interest in the union by the public.

Due to obstacles posed by Greek Cyprus, Turkey has been unable to open the 23rd and 24th chapters. In a number of areas, Turkey is in a much better position than some EU nations.

Why is Turkey, despite all of these improvements, forced to face obstacles set up by the union? Why are standards being invented for Turkey which has never before been enforced on other candidate countries?

Nearly all other European leaders have been replaced over the course of this time. I am the only one that is still around.

Why shouldn't journalists from our country follow the judicial process in Germany regarding the murder of eight of our nationals? When I say this, they respond with 'Erdoğan is so harsh'. Well, no offense, but I have to speak the truth.

No one should consign to any other way of thinking on the Gezi Park protests which were started under the excuse redevelopment plans. This is nothing more than a terrifying campaign of lies.

I shared my ideas regarding Taksim Gezi Park in an animated presentation prior to the 2011 elections. I am calling on my brothers who are sensitive to the environment. Come, and partner up with your Prime Minister. I know well what it means to be an environmentalist.

Why didn't they block the building of the Sheraton? With the building of Koç University as well as others, tens of thousands of trees were cut down on forest plots. I fought against it and the judiciary confirmed that we were right.

We have also made significant strides on the issue of terrorism. A part of those involved in the Gezi Park protests are trying to draw the resolution process into the issue.

Being an environmentalist does not mean setting fire and destroying public vehicles.

What we are against is vandalism and violence. I would sacrifice my life for those who come to us with democratic demands. If they explain to us what it is we have not fulfilled, I will hear them out with pleasure.

Let us tear down the Atatürk Cultural Center (AKM) and build a large architecturally appropriate opera building. They say they won't let us tear it down. I announced the project prior to my election. The public voted for us because they approved of these projects.

The green area behind the Hilton has been preserved because of our objections.

It is evident that there are games besides those citizens trying to relay their democratic requests, which are standing out in the forefront.

The Minister of the Interior is following the necessary procedures. If this situation had occurred in Europe they would have intervened much more harshly.

Turkey operates on a parliamentary system. We were brought on by the people and if we are taken away it will be by the people. We will never buckle under attacks against our national will. We came to power with 50 percent of the vote; however we continue to serve as the party of the nation's 100 percent.

We are also aware of who has provided financial resources to ensure international press and institutions release advertisements and paid articles. These are steps taken against our government by the interest lobby. However, we will do what our public demands and not what the interest lobby dictates," stated Erdoğan.