“We are trying to lower the candidacy age to 18” 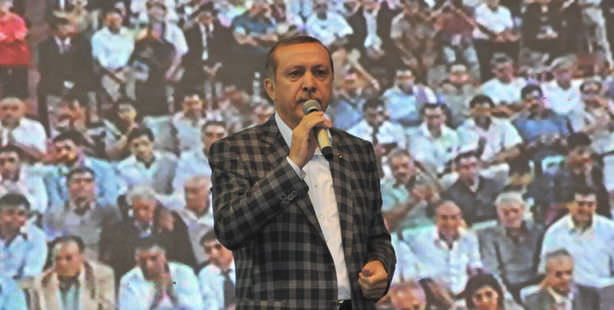 Prime Minister Recep Tayyip Erdoğan, will be bringing on the mandate that AK Party parliamentarians that have served three terms back to back will have to take a term off before re-eligibility. Erdoğan will also be opening up politics to the youth; the prime minister announced that he is working on lowering the age of eligibility to be elected down to 18.

Together with his wife, Emine Erdoğan, their plane landed in Adana's Şakirpaşa airport where they then boarded a helicopter to Mersin.

Two Cobra helicopters served to escort the aircraft carrying Erdoğan. Once in Mersin the helicopter first toured over the new sports facilities, giving the Prime Minister a view from above.
During his speech at the opening ceremony, Prime Minister Erdoğan stated:

"Today I am here for the opening ceremony. I will return on the 20th of June for the games. Also towards the fall I will return to Mersin together with a large group to attend other opening ceremonies. I once again congratulate Mersin on its hosting of the 17th Mediterranean Olympics. These types of structures suit Mersin. The AK Party government thought that laying out the foundations and structures for Mersin would be befitting.

The 17th Mediterranean Games were to be held in Greece, but only due to the economic crises were we asked to host them, and we told the committee that we could. Under normal standards, the organizations for an event of this scale would have started six years in advance, but even though we only started 18 months ago, the Mediterranean Games facility has been prepared to be exceptional in every way. In 18 months we will have completed 11 new facilities. We have realized 500 million TL in investments. Also for the continuing expenses of the games we have allocated a budget of 300 million TL.

Mersin will host the largest to date sporting organization in the history of the country, and we will be the hosts of this miniature Olympics. We have built a stadium with a capacity of 25 thousand, and I flew over it with a helicopter. I must admit I felt proud, I was filled with pride.

First and foremost, approach these developments with common sense. An incomparable magnificent stadium that possesses all incentives will be built but on the other hand you will stand against the demolition of the standing older one. There are people talking. We completed our entire project for these games. Those that tried to stand in the way... what did you do to Mersin? What were the discussion that this should be turned into a park? Go tell that to your mayor, they can make you a park. To this day how many green areas are there outside of this metropolis, my siblings from Mersin should research this. This stadium is a facility that cost 94 million TL to construct. It was completed in a short term around 5 months. God willing it will be ready by the 20th of June and we expect 25 thousand spectators in this stadium. We will be holding a booming opening.

Those that are in Taksim at this moment, burning and demolishing, and other areas of the country, burning and demolishing… I ask them; under the name of what freedom do they do this. What do you call this? There are ways to ask for freedom. If you trust your thoughts do not fear the freedom of thought. I ask you, what have you done for the freedom of those who were unable to attend universities for ten years due to the headscarf ban! Were their rights to education apparently not rights? What happened to those that made these girls of ours to suffer so much that brought them out into the city squares. Even though we didn't use one word to express the situation, the topic of closing the AK Party came about. At that time we didn't go out to Taksim Square. We put up our fight while staying within the boundaries of the law. Even though we have 330 parliamentarians we did not send our supporters out on the streets. But now you can see that the main opposition is trying to find here what they couldn't at the ballots. I tell my friends here in Mersin to give them their lesson in seven months at the ballots. My friends with and without headscarves will solve this problem together.

A youth that says curse words that don't belong in anyone's mouth at their Prime Minister cannot be my youth. The youth that stormed various places of work cannot be the youth searching for rights of this country. You will break, burn and trash! Eh? Searching for rights. I am voicing out to our youth with good sense; put your head between your two hands and think; what am I doing.

Can a government that planted 2 billion 800 million trees have a conflict with nature? Who was the mayor that cleansed Istanbul of its mountains of trash? The Haliç's odor was unbearable. Who cleaned the Haliç? Now you can fish in the Haliç. Before we came to office people traveled around Istanbul with masks. Why? It was a city of air pollution. Who did away with the air pollution in Istanbul? This brother of yours did. Now because 12-13 trees in Gezi Park will be uprooted and relocated you are going to give me a lesson in environmentalism. If you are an environmentalist this Prime Minister is at your call. If you say democracy this Prime Minister is at your call. Who is the one that says that if you serve 3 consecutive terms in parliament, you can't serve the 4th? Tayyip Erdoğan. The ones before us were stuck to their seats. Now those that served 3 terms will hand over their seats. Because we trust in our youth we lowered the required age to be elected to 25. Now we are working on bringing the minimum age to be elected down to 18.

What does Kılıçdaroğlu know about reality! What would the rest know about reality! But this brother of yours has come here through being politics, through the youth branches since the age of 18. As a government working on creating a better country for our youth, we would never close our ears to them. Before 1980 the youth would come to face each other. It has come to our knowledge that these were traps. Then, later due to terror our young soldiers were martyred. Now, we have begun the resolution process.

However, those who have acted in the name of anarchy and terror will do so again. Time to time there will be mistakes. There are around 600 of our police amongst the injured. We also have one martyr. We certainly will have a price paid for that martyr. Those setting the games and traps will not win in this country."