The Turkish Spring took place in 2002 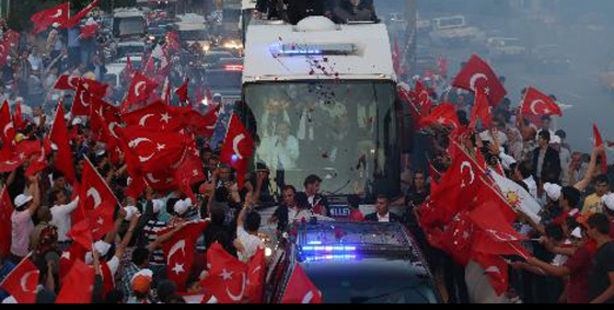 Prime Minister Erdoğan held a series of six rallies yesterday and returned to Ankara where he was greeted at Esenboğa Airport by citizens who flocked out to see him from all over the capital.

* "You cannot portray this country to the world as being a country that is terrorized. Unashamedly they are now referring to the 'Arab Spring'to call this a 'Turkish Spring.'How remiss are they? The Turkish spring took place on November 3, 2002 (in reference to the AK Party's victory in the general elections with a crushing majority.)

* This year the interest-rate lobby gained the most money. You will be the ones to turn off their faucet. They have always been uncomfortable whenever interest rates have dropped. The state has banks, let's benefit from them.

* Then one comes out and says, 'I am neither a leftist nor a rightist, I am a chapuller, a chapuller' (In reference to the world 'çapulcu' which has become a catchphrase used by protesters). Good luck with that. My dear brothers, do not allow these chapullers to revive. It is this nation's duty to put those who insult the nation in their place, however within the parameters of democracy.

* I am addressing those citizens who have risen to the bait. Please give up these protests. However, to embark on a movement as if you were the guild of janissaries, by saying such things as, 'you will remove this governor,' well then with all due respect. We will have to speak in the language that you understand."

A flood of love for Erdoğan!

Prime Minister Erdoğan returned to Ankara on Sunday after 12 days of absence from the capital. The Prime Minister addressed the crowds that flocked to greet him upon his arrival at Ankara's Esenboğa Airport from the top of an AK Party bus. Erdoğan was greeted by intense interest from citizens throughout the 35-kilometer route to the city center. As Prime Minister Recep Tayyip Erdoğan and Emine Erdoğan waved to the crowds, the public showed their admiration through waving flags and chanting slogans of support. Due to the crowds that came out to welcome him, it took Erdoğan's convoy four hours to reach Ankara's Akköprü Bridge from the Esenboğa Airport.