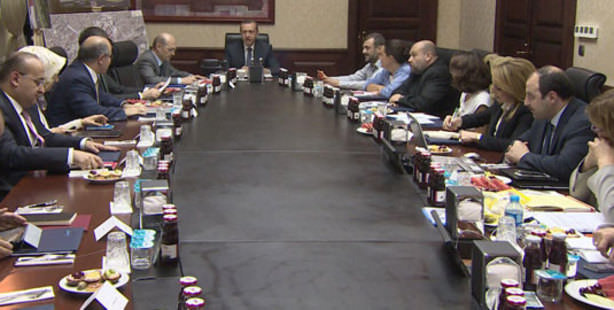 Prime Minister Erdoğan held a meeting with a specially selected delegation, comprised of actors, directors, architects, academics and students, to discuss determining a solution to the ongoing Gezi Park protests. The decision reached at the meeting was announced by AK Party Spokesman Çelik who explained they may hold a referendum in which he said, “We will ask Istanbul residents what they decide and we will abide by whatever that decision is.”

Prime Minister Erdoğan heard out each and every single guest during the meeting held at the AK Party General Headquarters which lasted for four-and-a-half hours last night. The members of the delegation expressed how pleased they were that a channel of communication had been established on the issue. As Erdoğan was seen taking notes, the delegation members relayed their concerns which were mainly centered on police brutality and the resulting intensification of protests.

AN INVITATION TO GEZI

According to information obtained regarding the closed-to-the-press meeting, Prime Minister Erdoğan expressed a sincere interest in possibly meeting with some of the youth activists involved in the protests. Prime Minister Erdoğan was supposedly told that the majority of activists do not have a political agenda and have been unjustly subjected to police violence as members of the delegation were stated to have suggested, "It would actually be very good if you could come to Gezi Park for yourself in order to better understand these youths." According to sources, the Prime Minister responded by stating that if the marginal and malevolent groups were to disperse then he would be willing to meet with some of the youth activists involved in the protests either at Gezi Park or if not at another location.

ERDOĞAN MAY EXTEND AN INVITATION TO YOUTH ACTIVISTS

After meeting with the Gezi Park delegation, Prime Minister Erdoğan also hosted two popular actors Hasan Kaçan and Necati Şaşmaz who plays the popular character Polat Alemdar from Valley of the Wolves Kurtlar Vadisi). Kaçan told reporters after the meeting that two of his children have also participated in the protests which he said he hopes will come to an end soon. Şaşmaz shared with reporters that the Prime Minister said he may invite a number of youth activists to meet with him at his working office in Dolmabahçe Palace.

CITIZENS TO HAVE THE FINAL WORD

A referendum will most likely bring a peaceful solution and possible end to the Gezi Park protests. In an announcement made after the meeting Erdoğan held with the delegation AK Party Spokesman and Deputy Chairman Hüseyin Çelik announced that they will be holding a referendum on the Gezi Park protest, and that Erdoğan proposed the idea following last night's meetings. "The decision will be made by Istanbul residents," said Çelik, adding, "It will be our pleasure to abide by the decision our public makes."

Explaining that they could discuss the issue of holding a referendum on the building of the Artillery Barracks in Taksim Square with the AK Party's Central Executive Committee, Çelik stated, "We will be asking the Istanbul public... Do you accept what is happening here or not? We have always been respectful of the public's decision and will not go against the public will. However, Gezi Park needs to be emptied out as soon as possible. Life there needs to return to normal and everyone who wants to go to Gezi Park should be able to freely do so."