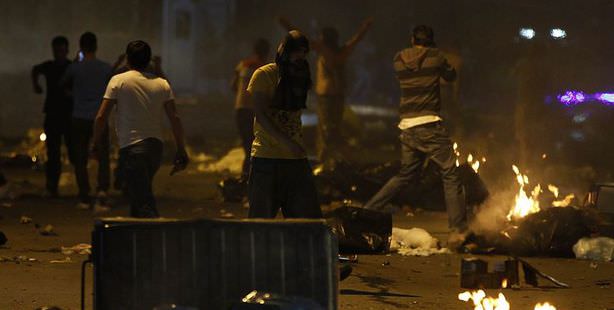 The young mother who Prime Minister Erdoğan mentioned was attacked for wearing a headscarf shares the details of her horrific experience. Subjected to people yelling, “This country is ours,” 25-year-old Z.D. recalls how she was dragged and kicked, her headscarf ripped off and her baby carriage torn from her hands and all in Istanbul’s prominent Kabataş district where she was getting off a ferry after a day enjoying the Prince Islands.

Prime Minister Recep Tayyip Erdoğan had mentioned the unfortunate incident during an AK Party group meeting, when he said that protesters had "dragged the daughter-in-law of a very important close acquaintance" because she was wearing a headscarf.

Z.D., a 25-year-old mother of a six-month-old infant recalled with great difficulty and shame how she was attacked by fellow citizens who had no regard for her or her child's well-being he has bruises all over her body and her baby is also bruised and has scratches all over her arms.

"I was aware that there was a group of environmentally-sensitive people that were holding a protest at Gezi Park against a shopping center being built in Taksim. I had plans to go to the Prince's Islands with my friends on Saturday. Due to the fact that we were on the islands all day, I had no idea about the developments in Istanbul. My telephone's battery was about to die so I called my husband and told him what time I would be arriving. Just as I suspected, my phone's battery ran out while I was on the ferry. I ended up calling my husband from a pay phone near the ferry station and he told me he was on the way and that I should wait across the street.

At that point I noticed the crowds at Kabataş and I figured it was just more demonstrations in support of the Gezi Park protesters. Nevertheless, I crossed the street with my baby carriage and began waiting.

I began to hear derogatory chants against the Prime Minister and when I looked behind me and saw the enraged stare of women around 25-30 years of age, I realized their chants were directed at me.
Before I could comprehend what was happening, all of a sudden I found myself in the middle of 70 to 100 half-naked men who were wearing leather gloves and strange bandanas. I lost control of the stroller.

When one woman said, 'Whatever happened to this country has happened because of their headscarves, hit her," a man proceeded to hit and slap me from behind. Then they began yelling. They said they were staging a revolution, a riot and that they would not leave the country to us. They said they would do horrible things to Erdoğan and all of us, and told me they were the true owners of this country. The curse words were too horrible to repeat, but they did say they would hang Erdoğan, meanwhile they were kicking me.

An elder gentleman tried to help me but they beat him up as well as his daughter. Then all of a sudden they left and ran towards İnönü Stadium. At that point I lost consciousness. I don't remember what happened next, I just know that when I regained consciousness I smelt like urine. I got up and tried to find my baby."

This young mother is the daughter-in-law of the Istanbul Bahçelievler District Mayor. However, this attack should not be misconstrued; it had nothing to do with the fact that this young mother was part of a family involved in politics. She can no longer watch the news. She can not leave the house, nor can she resume breast feeding her six-month-old child.

The case has been taken to court and the Governorship has city surveillance footage recording the event. However, this is not the only incident of its kind that has taken place recently.

Bugün Newspaper reporter Zeynep Ceylan's headscarf-wearing older sister was also attacked, both physically and verbally on the metro by individuals who said, "I am returning from fighting off insects like you." This incident is also being taken to court.

Former AK Party Güngören district chairman Abdullah Başçı was knifed in the neck with the same reasoning and anger by groups supporting the Gezi Park protests. Like the others, this case will also be taken to court.