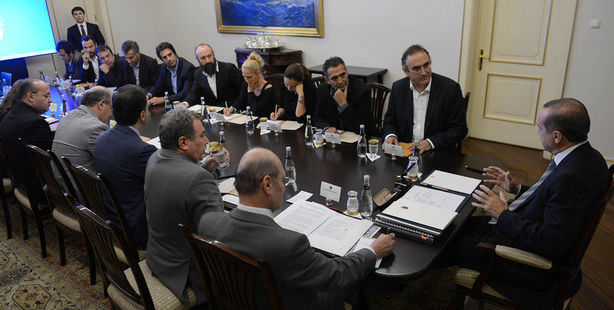 Turkish artists and members of the Taksim Platform met with Prime Minister Erdoğan late on Thursday to discuss reaching a solution to the current occupation of Gezi Park in Taksim Square. Following the meeting, artists announced that Prime Minister Erdoğan pledged not to push ahead with plans to build over the park in Istanbul to build a replica Ottoman-era barracks until a court issued a final ruling on the project, in what they heralded as a positive sign after two weeks of protest. If the court rules in favor of the project, the decision to go ahead will then only be made after a referendum is held allowing citizens to voice their opinion on the redevelopment plans.

Prime Minister Recep Tayyip Erdoğan met with a delegation overnight mostly made up of actors and artists but also including two members of the umbrella protest group the Taksim Solidarity Platform to discuss the situation at Gezi Park. Although Erdoğan has held a series of meetings with a select number of well-known figures such as Hülya Avşar, last night's attendants differed in the sense the delegation included members of the Taksim Solidarity Platform, which has acted as a spokesman for the protesters, as well as a number of actors and performers who have had a presence in the protests since the very start of demonstrations over the redevelopment of Taksim's Gezi Park.

Halit Ergenç, who plays the leading role in the popular television series Suleiman the Magnificent, made an announcement on behalf of the artists that attended last night's meeting. Ergenç announced that Prime Minister Erdoğan expressed that they would respect the ongoing legal process regarding the redevelopment of the park and pledged to not act outside of said jurisdiction. Should the court ruling oppose the building of the Artillery Barracks in Taksim Square then, the Prime Minister said, they would reorganize the area as a park which they would protect, explained Ergenç.

Emphasizing that if the court rules in favor of building the barracks, the government is then planning on holding a public vote on the issue, Ergenç stated, "Therefore, there will be no changes to Gezi Park until this judicial process is finalized. From here on out they now want the comrades out there to return to their homes and to track this ongoing process." Ergenç relayed that Prime Minister Erdoğan stated, 'we now want everyone to get a comfortable sleep in their own beds and for this tense environment and the events taking place on the streets to come to an end.'

"What is most important is that we had the opportunity to voice our grievances regarding the violence of the protests and they had the opportunity to relay their issues," explained Ergenç adding that they also requested that any imagery or evidence of violence be brought to their attention, regardless of who was responsible. Ergenç said that the government officials announced they have begun an investigation which they plan to follow through to the end and told the delegation, 'this we guarantee.'

Poet, writer, TV host and philanthropist Sunay Akın expressed how pleased he was to have been a part of a meeting in which no other options besides a peaceful democratic route was discussed to handle the Gezi Park protests. "From here on out, the democratic solution process, which we have all been expecting, has been underlined and consolidated. What my heart desires is for us to go from here to Istanbul, to Gezi Park and to celebrate and crown this finale all together and in a democratic manner with our art, poems, songs and documentaries. The legal process continues. Taksim Park will remain a park like its namesake," stated Akın.

A POSITIVE RESPONSE FOR POSITIVE WORDS

Speaking as the secretary of the Taksim Solidarity Platform TMMOB City Planning Chamber Istanbul Department Chairman Tayfun Kahraman said Erdoğan had promised to abide by the outcome of an ongoing court case filed in an effort to stop the redevelopment and would hold a referendum on the plans if the court ruled in the government's favor. "The prime minister said that if the results of the public vote turned out in a way which would leave this area as a park, they will abide by it. His comment that the project will not be executed until the judiciary makes its decision is tonight's positive result," Kahraman told reporters. When asked if he believed these statements would suffice to put an end to the ongoing protests, Kahraman stated, "These were positive words and we believe that our friends will evaluate these statements positively."

Hülya Avşar: The PM convinced me!

Earlier on Thursday, Prime Minister also hosted actress Hülya Avşar to discuss the fate of Gezi Park. Speaking to reporters following the meeting, Avşar stated the following: "No one is in the wrong and everyone is right. However, it is true that there is a group using people on both sides. The youth needs to have a leader.

I am not in favor of artists going to Gezi Park. There is the danger of them going beyond reason from the excitement of seeing artists supporting their cause.

Unfortunately I received a signal that there may be an intervention on the park within 24 hours' time. I asked if they could wait, but they shared two examples with me, which convinced me. In short, the only thing that upset me walking away from this conversation was the notion that they may intervene if the protesters do not withdraw within 24 hours.

Our Prime Minister wants those protesters who are out there in awareness to retreat in order for us to see who it is that is causing us grievances," said Avşar, adding that she would support a referendum as well as the renovation of the AKM so long as it was still named the Atatürk Culture Center.