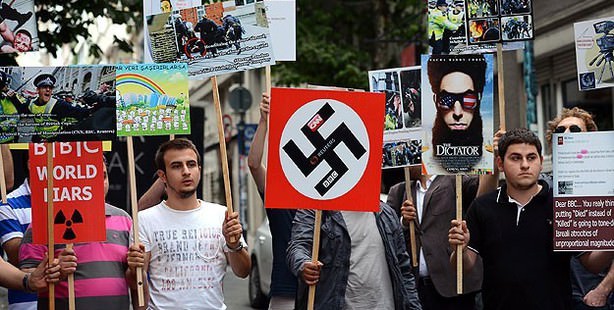 At 2 pm on Thursday afternoon, a Turkish youth activist group ‘Bizim Çocuklar’ (Our Youth) orchestrated a protest of what they view as the double standard exhibited by western media outside the BBC’s Turkey Office in Istanbul’s prestigious Nisantaş neighbourhood.

Protesting the BBC, CNN, and Reuters, amongst many others, the Bizim Çocuklar activists came prepared with picket signs depicting messages and images of police brutality from the Occupy London protests. Stationed in front of the BBC offices they issued a statement to the press.

"We see the reports and broadcasts of agencies such as CNN International, the BBC, and Reuters depicting the situation that started in Gezi Park as if "war has broken out in Turkey.

It is both unacceptable and impossible to depict these occurrences in Taksim as being demonstrative of civil war."

Yet another reason driving this protest was the severity of how these foreign media giants portrayed the protests in Taksim, Izmir and Ankara while ignoring parallel events that are either occurring presently or have in years past, as Ajdin Didic, a student from Bosnia who was attending the protests pointed out.

"When the Occupy Wall Street protests were occurring in New York city a few years ago, did the CNN offer a live stream for one, yet alone seven hours on the protests? Is it that they were not able to produce live programming in the center of Manhattan, or are they are more capable of doing such broadcasts here across the Ocean in Istanbul? Since this is not the case it is obvious that they are attempting to censor what we are exposed to, in order to suite their agendas."

"Currently the Occupy London protests still continue in the British capitol. Yet there is no mention of the visible police brutality, or the nature of the protests on the BBC site. Is it possible that the protests in Turkey hold more importance to the British Broadcasting Corporation then the protests that are occurring on their own soil?"

"If the struggles of those abroad are so important to the CNN or the BBC, how is it that we see no mention of the ongoing protests in Bosnia on their sites or their broadcasts? It is simple; it doesn't suit their political agendas to even acknowledge the existence of these other protests."