Who is it that incites social crises in growing economic nations such as Mexico, Brazil and Turkey? 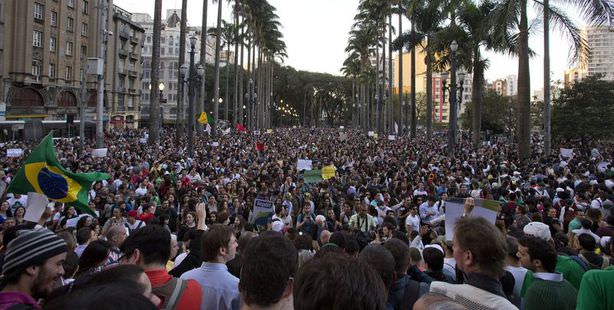 The ‘innocent’ protest which began at the start of the month in Brazil, as it did as well in Turkey, has since transitioned into a point of interest for its dark demonstrations. Both nations, as they suffer from simultaneous protests, stand out for having bright and promising economies.

Police and protesters have been clashing on the streets of Brazil since the start of June. What initially drew activists to the streets was an increase in public transportation fees. The images coming out of Brazil are quite similar to the images from Turkey. What was once an innocent protest has suddenly transformed into a social crisis in which illegal organizations are now taking part. As the two nations deal with simultaneous protests, what stands out is the fact the both countries have some of the world's brightest and promising economies. Although they may have different stories economically, both nations are competitive on a global scale. While Brazil aims to become the world's fifth largest economy, Turkey is progressing to become one of the top ten economies in the world. Let us emphasize one again the fact that political stability is imperative in order to reach these goals. Brazil and Turkey's weakest link is their fast capital outflow. A report released by Morgan Stanley this week places Brazil as the most vulnerable nation for capital outflows amongst emerging economies. According to the same report, Turkey, like Brazil carries the very same risk. The timing of the report is also highly significant! According to sociologist Mustafa Odabaşı, who has been studying the social movements and crises in South America for awhile now, the environment attempted to be created Turkey and Brazil is similar to the "Yo Soy 132" demonstrations which took place in Mexico in 2011. Odabaşı points out those social crises which surface during a time in which the economy is generally on course need to be well-studied. In Mexico, the protests, sparked by the sharing of a video on Twitter entitled "Yo Soy 132" which was made by 131 university students, were quickly popularized as a result of international media and other elements. The protests were geared towards preventing the charismatic Governor Enrique Peña Nieto from being elected to president in the elections to be held ten months later. While demonstrators' slogans and demands were in variety, there was just one sole individual who was the target. Odabaşı points out that Nieto's strong leader profile was difficult to contain and explains that he not only pursued rooted changes, especially in the energy sector, but he was also intent on developing new global strategies. According to Odabaşı, the intentions of the "Yo Soy 132" protests in Mexico were to cut down to size a leader who pursued his own agenda without paying any regards to maintaining the balance. In the end, as a result of both global elements and the opposition garnered on the streets, even though the protests may not have prevented Nieto from being elected as president it did work to establish a mobilized opposition group in Mexico.

It doesn't appear to be a coincidence that the social fluctuations which arose in countries such as Mexico, Brazil and Turkey contain similarities to this degree.