A fairytale opening for the 2013 Mediterranean Games 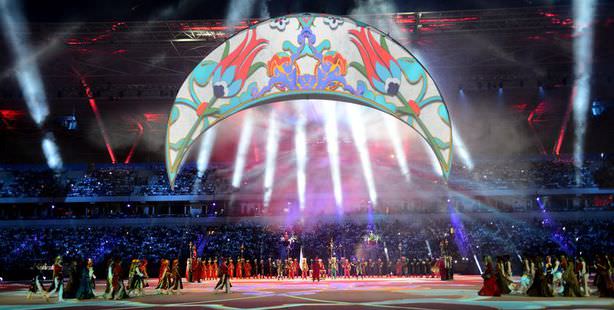 Speaking at the opening for the 17th Mediterranean Games, Prime Minister Erdoğan said that by hosting the biggest sports organization in the Mediterranean in Mersin, they are also rehearsing for the 2020 Olympics.

A lavish opening ceremony was held for the 2013 Mediterranean Games which are being hosted in Mersin this summer. The festivities were also attended by Prime Minister Recep Tayyip Erdoğan and International Olympic Committee (IOC) President Jacques Rogge. The show involved the history of the Mediterranean detailed through the imagery of a Piri Reis map and a sound and light show which accompanied, providing the 25,000 sports lovers who filled the Mersin Stadium on Thursday an unforgettable evening.

Addressing the crowds at the grand opening ceremony, held in the 25,000 capacity Mersin Stadium, which built especially for the summer games, Prime Minister Recep Tayyip Erdoğan stated, "By hosting the Mediterranean's biggest sports organization in Mersin, we are in fact rehearsing for the 2020 Olympics. I hope we will be able to host our athlete brothers that have come out here to compete from 24 different nations in the 2020 Olympics in Istanbul as well."

Erdoğan concluded his speech with a message of unity, stating, "The Mediterranean Sea is not one that divides us, it is one that brings us all together. We hope from the bottom of our hearts that these games contribute to changing the Mediterranean first and then the world by way of bringing us closer together."
The opening ceremony began with the imagery of a map by Ottoman cartographer Piri Reis. As visuals depicted a ship sailing over the map, Kenan Işık provided the voice to a story of civilization in the Mediterranean which was relayed from the perspective of Piri Reis.

A whirling dervish show then followed as everyone's attention was diverted to the dervishes who suddenly took flight in the air as they continued to spin. A janissary band performed as fireworks were set off, ending with the Ottoman sultan's signature being displayed in the middle of the stage.

The 17 Turkish states throughout history were represented by 17 stars in a visual display in the center stage as the story of the founding of the Turkish Republic was brought to life. The visuals depicted a crescent and star which joined together only to transform into the Mediterranean. The visual show continued by joining the crescent and star once again to a back drop that turned red, suddenly depicting the Turkish flag.

Popular musicians Mazhar Alanson, Ajda Pekkan and ENBE Orchestra performed as part of the show, which concluded with a spectacular fireworks display.

MEDITERRANEAN GAMES KICKS OFF WITH COMPETITIONS IN NINE BRANCHES TODAY

The Mediterranean Games kicks off today with competitions in nine branches including men's and women's swimming, which will be held at the Mersin Olympic Swimming Pool, with the elimination round taking place in the morning and the finals to be held tonight.

The group games begin in men's volleyball in the Toroslar Sports Center. From Group A, Egypt-France play at 13:00, in Group B Tunisia-Algeria play at 15:30 and at 18:00, Italy-Macedonia. Turkey, which is part of the three team Group A, plays their first match on Sunday, June 23rd against Egypt.

In artistic gymnastics, women will be competing in the Mersin Gymnastics Center. Men and women will also be competing in sailing races today at the Mersin Marina. Boxing will be held at the Tarsus Sports Center, while men's and women's rowing elimination races will be held on the Seyhan Barrage Lake.
In football, Turkey's Under-19 National Team faces off against Morocco tonight at 21:45 at the Tarsus City Stadium.