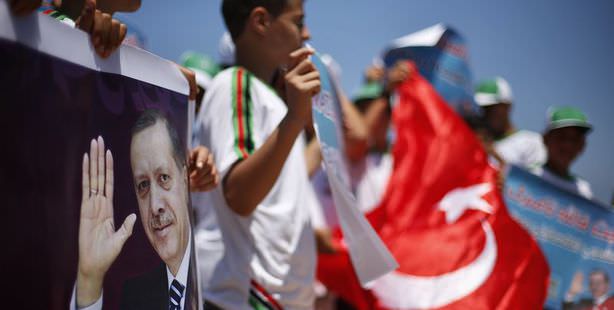 Palestinian Prime Minister Haniyeh says that Palestine will only be able to overcome the difficulties they have endured by virtue of Turkey and said that they are preparing a welcoming for Prime Minister Erdoğan of the likes never before seen in Palestine.

Ismail Haniyeh, the Prime Minister of the Palestinian administration in Gaza, expressed that Turkey will be the reason Palestinians will be able to overcome what they have endured and said that Prime Minister Recep Tayyip Erdoğan's impending trip to Gaza will be a historical one.

Discussing Prime Minister Erdoğan's highly anticipated visit with Turkish journalists in Gaza, Haniyeh reminded that just last month, on June 18th to be exact, he had the opportunity to meet with Prime Minister Erdoğan in his office in Ankara during which they discussed Hamas and Al Fatah reconciliation, the blockade on Gaza, regional issues and the Premier's impending trip to Gaza.

Prime Minister Haniyeh said that they were expecting Erdoğan to visit as soon as possible and stated, "This will be a historical visit. Therefore, we will be staging a historical welcoming. It will be unlike any other. We are ready to greet the Prime Minister in a manner that is worthy of him. This will be a show of gratitude by the Palestinian public. This is a duty that needs to be done for those who died as martyrs aboard the Mavi Marmara. This will be a type of welcoming never before seen in Palestinian history. I suspect no one will stay at home on that day. The roads will be closed off from Rafah to Gaza."
Haniyeh also reminded that Prime Minister Erdoğan has constantly called on Hamas and Al Fatah to reconcile and stated that this trip will have a unifying and conciliatory effect which will lead to the end of this issue.

Pointing out that this trip will be taking place during a period of peace in terms of both security and politics, Haniyeh stated the following: "Prime Minister Erdoğan's trip to Gaza will be an extremely significant initiative towards putting an end to the embargo on Gaza. And this initiative will be successful. At present there is no specific date, however we are ready and waiting as if it could take place at any moment. I want to say to Mr. Prime Minister, that we are highly anticipating his visit to Gaza."

ISRAEL WILL BE UNCOMFORTABLE

The Palestinian Prime Minister also mentioned that Israel will be uncomfortable with Prime Minister Erdoğan's visit to Gaza, explaining that they have already expressed concern with trips by the Qatar Emir, 11 foreign ministers and Hamas leader Khaled Mashal. Haniyeh said that after the "One Minute" incident in Davos, Prime Minister Erdoğan has become a household name in Palestine and explained that he even named his own grandson Erdoğan.