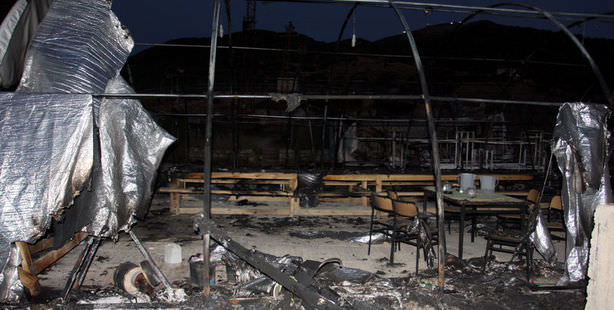 Violence escalated amongst a group staging an illegal march to protest construction work to expand a military post in Lice, Diyarbakır, leaving one dead and nine wounded.

One person was killed and nine wounded on Friday in a scuffle between a group of 250-300 supporters of the opposition Peace and Democracy Party (BDP) and gendarmerie forces in Turkey's southeastern town of Lice in Diyarbakir province. The group, which included women, set fire to three tents and a container that was housing the construction workers. When they attempted to enter a military post, gendarmerie forces shot rounds in the air and used tear gas on to contain the crowds.

Diyarbakir Governor Mustafa Cahit Kirac told reporters that the group demanded the halting of construction work to expand a military post, which was started a few months ago. He said the group attacked the post with Molotov bombs, demolishing the work site where workers stayed.

"The group went into the post attacking with stones. Gendarmerie forces intervened on the group using tear gas. There is one dead and nine injured. The wounded, two of which are in critical condition, are being treated. Crime scene investigators and the intelligence service have been investigating the attack," Kirac said.

A delegation of BDP deputies, including party Co-Chair Gültan Kışanak arrived later on Friday to the Kayacık village, the site of the conflict, located 20 kilometers from the district center of Lice.

Diyarbakir Governor Kirac emphasized that it was impossible to accept such an event while the peace process was under way, adding, "There might be different groups trying to provoke and sabotage this process. Whoever is responsible for the provocation will be revealed."