Counterfeit money put on the market during Gezi Park protests 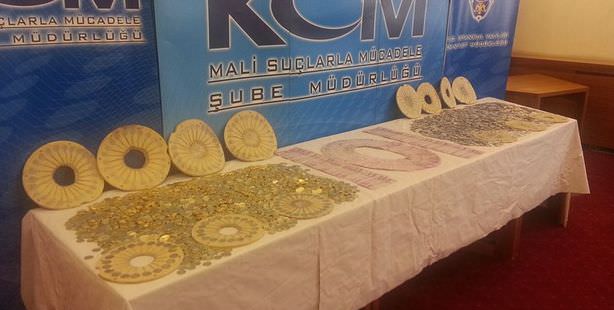 Six counterfeiters produced 50,000 liras worth of fake 1 TL coins, which they infiltrated in the market through fast food stands during the Gezi Park protests.

Teams from the Istanbul Police Department's Counter Financial Crimes Department received a tip that a significant amount of counterfeit money was planned to be infiltrated in the market by two separate networks in Bağcılar and Fatih.

After extensive tracking of the two networks, security forces staged a raid on both counterfeiting gangs in the early morning hours of Monday. Six arrests were made in Istanbul's Fatih, Eyüp, Bağcılar and Beyoğlu districts. In a simultaneous separate operation, police entered a plastic jewelry workshop where they uncovered 9,200 fake 1 TL coins, six silicon molds, a melting pot and a machine used to mould coins. A raid on a business location in Bağcılar revealed 504 counterfeit 200 lira bills ready to be put on the market, for a total value of 108,000 liras.

The plastic jewelry workshop which police raided had been transformed into a mini minting station by counterfeiters, who admitted to using a material they called "Zamak" which consists of copper, zinc and aluminum for minting the coins.

The networks supposedly distributed a significant amount of the total 50,000 counterfeit coins to businesses in Taksim during the Gezi Park protests. Five arrests were made out of the total six counterfeiters that were brought to court.

This is a translation of an article originally written by Ufuk Emin Köroğlu.