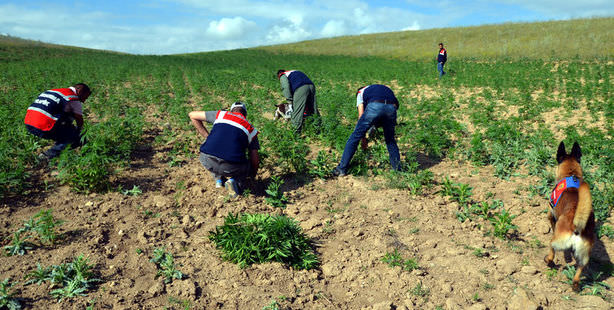 Lice’s Kayacık Military Outpost is in charge of the Fis Plains, which is where the highest amount of cannabis is cultivated in the country. Two-thirds of the cannabis in Turkey is grown in Diyarbakır.

The Kayacık Gendarmerie Military Outpost, located in the southeastern province of Diyarbakir's Lice district, was the site of recent clashes between security forces and a group that attacked the construction site of the outpost, which was being expanded. One person was killed and nine others wounded in the incident which is being investigated by the Diyarbakır District Deputy Chief Prosecutor.
Prosecutors investigating the case have requested the identities be established of provocateurs whose faces were covered by kaffiyehs that were caught on security footage setting the outpost on fire and instigating conflict between villagers and the gendarmerie. Prosecutors are also requesting the identities of those who closed off traffic on the Lice-Bingöl highway and then redirected cars to the rural road as well as the abductees of a specialist sergeant be determined.

It turns out that the military outpost, for which demonstrations erupted against the construction of an expansion, is directly connected to three major narcotics operations that took place in the past six months. In January, an air and ground operation in a 40 kilometer-square area in the Yalaza, Ortaç and Bağlan villages uncovered 21 tons of narcotics with a market value of 40 million liras. On May 3, the second big operation to take place this year was staged simultaneously on five villages in the Lice, Kocaköy and Hazro triangle of districts. After the operation, a crowd of villagers from the Ortaçe Yalaza villages, located next to the Kayacık outpost, staged a sit-in protest demanding the confiscated narcotics be returned. The third biggest operation took place just three days before the violence erupted at the Kayacık outpost on June 25. In a simultaneous operation on the Kutlu, Tepe and Türeli villages in Lice, security forces confiscated two million cannabis plants which had the capacity to produce 40 tons of narcotics at a market value of 60 million liras.

THE PLAINS WILL BE UNDER OBSERVATION

Drug traffickers were against the plans to expand the outpost which included the building of concrete towers to allow for surveillance of the Fis Plains. For these drug traffickers, the PKK announcement demanding all outpost and barrage constructed be halted was an opportunity to provoke villagers to ignite the clashes over the outpost. Diyarbakir prosecutors are now looking all aspects of the incident.

The Security Directorate International Terrorism and Cross-Border Crime Center (UTSAM) has prepared a striking report on cannabis cultivation in Turkey. According to security forces findings, 37.5 million plants of cannabis, which have a market value of 2.250 billion TL, were confiscated by police throughout Turkey. Approximately two-thirds of the illegal cannabis cultivated in Turkey is grown in Diyarbakır, and especially in the Lice district of the southeastern province. Police and gendarmerie forces in the district have confiscated nearly 24 million plants of cannabis. According to the report, the main reasons this region is favored for cultivation is the climate as well as the fact that the Lice-Kulp-Hani regions are mountainous and therefore it is difficult for security forces to control and access the area.

Upon receiving a tip, gendarmerie forces in Van staged an operation in a rural region of Van's Başkale district. Police confiscated 1,440 million cannabis plants in a 12,000 decares area.

This is a translation of an article originally written by Alper Sancar and Özgür Cebe.