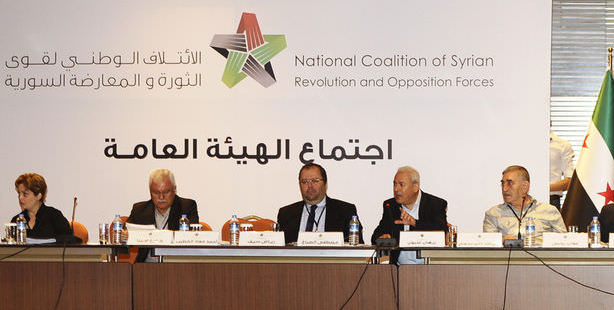 Syrian opposition groups gathered in Istanbul on Thursday to discuss the ongoing humanitarian tragedy and choose an envoy that will attend a planned peace conference in Geneva.

The National Coalition of Syrian Revolutionary and Opposition Forces, the main umbrella organization of Syrian opposition groups, met in Istanbul on Thursday to choose an envoy that will represent them in a planned international peace conference in Geneva to find a settlement to the Syrian civil war.

The opposition groups' meeting is expected to last for two days. Thursday's meeting highlighted the ongoing humanitarian tragedy in the nation, and also focused on the future of the interim government. The 114 member Syrian National Coalition will also be settling on a new board of management to lead the interim government for which Ghassan Hito was elected to serve as president in March 2013.

According to sources, on Thursday, Secretary General of the National Coalition of Syrian Revolutionary and Opposition Forces Mustafa Sabbagh and head of Union of Democrats Michel Kilo agreed on the names of candidates for the board of management of the coalition. The election of the board of management is expected to take place on Friday.

On Friday, the coalition is also set to also name an envoy that will represent the opposition in a planned peace conference in Geneva, for which no date has yet been set.