All of Turkey stands against General Sisi and behind Morsi 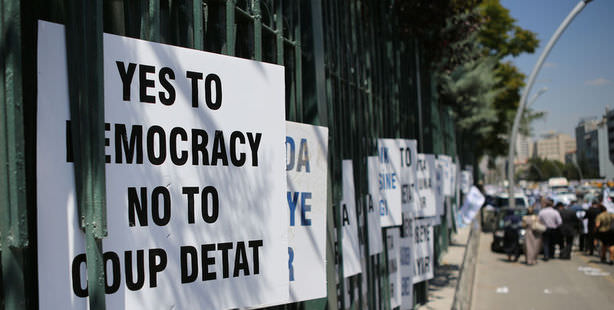 Protests against General Sisi’s military coup in Egypt to oust the nation’s first democratically elected president Mohamed Morsi spread throughout Turkey yesterday as people gathered after the Friday prayer ceremony in provinces spanning from Ağrı to İzmir and Adana to Rize to voice their dissent.

In provinces throughout Turkey on Friday, protests were held against General Sisi's coup in Egypt which ousted the nation's first-ever democratically elected leader. While numerous rallies were held following the Friday prayer ceremony in cities throughout Turkey, members from the Association of Human Rights and Solidarity for Oppressed Peoples (MAZLUM-DER), the Civil Servants' Trade Union (Memur-Sen) and the Confederation of Turkish Real Trade Unions (Hak-İş) also gathered on Friday in front of the Egyptian Embassy in Ankara to protest the coup in Egypt. Waving banners and chanting slogans, demonstrators condemned Sisi's coup and called for respect for the national will.

Nearly 2,000 demonstrators also gathered in front of Istanbul's Fatih mosque to voice their dissent against the overthrowing of Morsi in Egypt. Chanting, "Stand upright, Muslims stand with you," the crowds waved banners in support of Morsi's reinstatement.

Demonstrations were spread throughout Turkey as masses gathered after the Friday prayer ceremony in provinces including Adana, Adıyaman, Ağrı, Bursa, Izmir, Muş, Rize, Sakarya, Tokat and Van. Humanitarian Relief Foundation Chairman Bülent Yıldırım stated, "All the people in the world have flocked out in support of Morsi."

Friday was the third day in a row that protesters have taken to the streets in Turkey. Demonstrations have been held against the military takeover in Egypt in Istanbul and in Ankara, as well as in other Turkish provinces ever since the Egyptian army's announcement of the coup on Wednesday, July 3rd. Mohamed Morsi, the country's first elected president, was ousted by the army on Wednesday by the military which also temporarily suspended the constitution.