President Gül calls for a return to democracy in Egypt 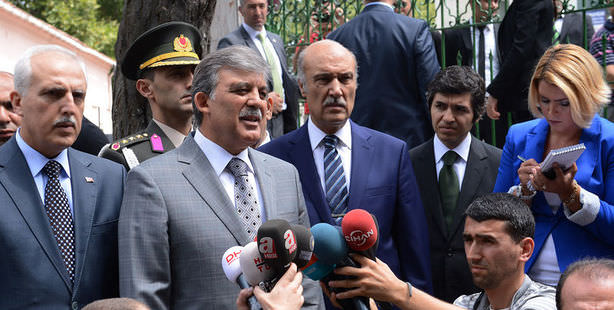 President Abdullah Gül expressed his disappointment in the disruption of democracy in Egypt as a result of General Sisi’s coup and stated that the country needs to return to democratic rule as soon as possible. Our greatest wish is for elected politicians to begin ruling Egypt once again,” said President Abdullah who on Friday expressed his concern at the blow suffered to democracy in Egypt.

President Gül expressed how disappointing and concerning this recent blow to democracy in Egypt was and said that they place high importance on ensuring Morsi and his comrades are not aggrieved in any way and emphasized that this was a crucial factor in order to ensure stability in Egypt as soon as possible.

"Egypt is Turkey's friend and brother and is both the heart of the Arab world and a very important country in the region. After the long reign of an authoritarian regime, we were thrilled to welcome democracy in Egypt. We are just as disappointed and concerned now as we were happy then to witness this disruption in democracy," said President Gül.

Expressing that their greatest desire is for the Egyptian public to once again embrace democracy, President Gül stated, "It is not possible to have a healthy democracy in just one year after an authoritarian regime which has ruled for many, many years. One of the main rules of democracy is that those who are brought on through an election also leave through an election. From this perspective, this disruption is extremely concerning. One of the most important issues for us is to ensure Egypt's first legitimately elected President Morsi and his comrades are not aggrieved in any way. This is a crucial factor in order to ensure stability in Egypt as soon as possible. Our greatest wish is for transparent, fair and free elections be held in Egypt as soon as possible with the participation of all political movements and establishments and for the administration to once again be handed over to the public and to the civilians and for an elected administrator to once again begin ruling Egypt. Just how we have always been in solidarity with Egypt, we will continue to uphold this unity," said Gül adding that they are closely watching the developments as they unfold.

"Our greatest wish is that that this process will come to an end as soon as possible without incurring significant harm on Egypt and that democracy will once again reign in the country," said Gül.