Davutoğlu calls on counterparts from 12 nations to ‘speak out’ 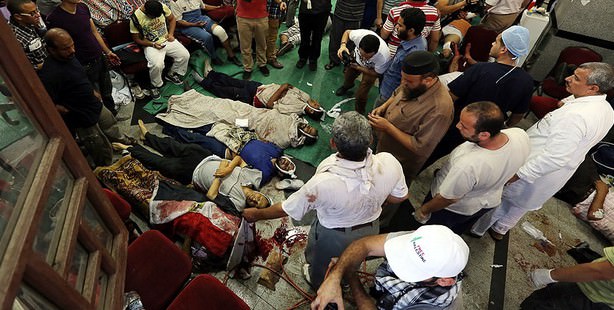 Foreign Minister Davutoğlu has been conducting international diplomacy by calling on his counterparts to “speak out against the situation for Egypt to return to civilian rule as soon as possible”.

For the past two days now, Foreign Minister Ahmet Davutoğlu has been calling on the international community and especially EU nations, to intervene in the crisis in Egypt. Davutoğlu's telephone diplomacy began Sunday night and continued into Monday morning. Davutoğlu called the foreign ministers of a number of nations, especially European, which have not displayed a clear stance regarding the regime change in Egypt. Davutoğlu also discussed the steps to be taken for a return to democracy in Egypt with EU High Representative for Foreign Affairs and Security Policy Catherine Ashton, as well as his counterparts in EU Term Chair Lithuania, Sweden, Norway, Finland, Poland, Luxembourg, Netherland, France, Brazil, Qatar and Morocco.

Davutoğlu warned his counterparts in EU member nations to not remain silent to the military overthrow of the regime and delivered the message, "A coup is when the military overtakes the administration. I would like you to call this what it is."

Davutoğlu further expressed that in order to ensure that democracy in Egypt is not interrupted long term; the international community needs to deliver a message to the administration run by Sisi that is both accurate and from a single voice.

"Raise your voices and call for a fast transition to a civilian regime," said Davutoğlu. The Foreign Minister also commented on the attack staged by Egyptian's military forces early on Monday which led to over 50 deaths on Twitter by writing, "I strongly condemn the massacre, which took place during the Morning Prayer, on behalf of the basic human values we stand up for. We wait for our Egyptian brothers and sisters to claim democracy and free will despite the provocations."

"DO YOU HAVE A CLEAR CONSCIENCE?"

An announcement released by the Foreign Ministry on Monday following the attack stated, "This attack, in which people were targeted in masses, appears to be an incident which could lead to extremely grave developments in Egypt. This attack also contains elements of provocation that could ignite violence. We are calling on the international community to side with democracy and to support the Egyptian public's struggle for democracy."

Deputy Prime Minister Bekir Bozdağ also released a statement on his Twitter account yesterday in response to the devastating attack. "I strongly curse and condemn those who staged this massacre and those who ordered it. As for those who are backing the military intervention in Egypt through refraining from calling it a coup, through expressing support or by celebrating it in joy, do they have a clear conscience," asked Bozdağ.