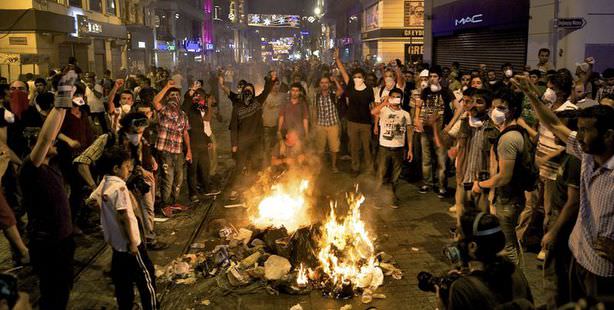 Police broke up crowds of protesters marching towards Istanbul's Gezi Park as the park was briefly re-opened and then closed again to visitors on Monday after numerous rally calls.

Police fired tear gas and water cannon Monday on protesters who wanted to hold rallies at Gezi Park, located in Istanbul's central Taksim Square. Protesters gathered at Istiklal Street and marched towards Taksim Square to enter Gezi Park, the focus of mass protests last month against the redevelopment plans of the park including a replica of an Ottoman-era military barracks. Several people have been detained amid police intervention.

Following the intervention the protesters dispersed to side streets forcing some a number of shopkeepers to close down. Istanbul Governor Huseyin Avni Mutlu announced on Monday that Taksim Gezi Park was re-opened to the public following weeks of revamp work, however later yesterday evening the park was closed again, cordoned off by police after protest leaders called a rally for Monday evening.

Istanbul Governor Mutlu said on Monday, "Gezi Park is open for our people, for those who do not want to get involved in protests. Parks belong to the public. We will never permit those trying to turn Gezi Park and Taksim Square into an area of illegal protests and invasion." Police detained 50 people during Monday's illegal protests at Taksim and Istiklal Street.

Meanwhile, on Monday, a Turkish court ruled arrest to arrest 13 people out of 15, who were previously taken into custody upon claims of membership to terrorist organizations, destroying public property and shops, provoking the public and resisting police officers in last month's Gezi Park incidents.